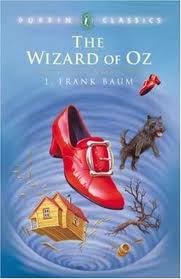 “Dorothy lived in the midst of the great Kansas prairies, with Uncle Henry, who was a farmer, and Aunt Em, who was the farmer’s wife.”

Whether first introduced to the book or the movie, which one of us is not familiar with the story of The Wizard of Oz?  As I child, I remember feeling dizzy as Dorothy was whirled away in the cyclone to the land of Oz; those shoes she inherited from the dead Wicked Witch of the East, just dazzled; the Scarecrow who wanted a brain, the Tin Man who wanted a heart, and the Lion who wanted courage stirred my sympathies, and I was as in awe of Oz as Dorothy and her companions, until I found out, as they did, that his persona was all a hoax.  All throughout Dorothy’s adventures with the Munchkins, the Flying Monkeys, and  the Wicked Witch of the West, I cheered for Dorothy to find a means to return safely to Uncle Henry and Aunt Em and her home in Kansas.

Re-reading this book as an adult, I admit I’ve lost the delight of the childhood experience, yet I found if I focused on the story’s simplicity, there was charm in it.  Both Dorothy and her companions were straightforward, uncomplicated personalities, trusting, honest and unquestionably sincere.  In spite of the dangers they encountered, somehow their innocence and naiveté helped them pass through their trials and realize their dreams.  While the Scarecrow, the Tin Man and the Lion each desire a quality that they perceive they lack, their actions in situations of danger, show that they already possess these qualities, and that they simply had to employ them, in order for them to be revealed.  Perhaps this shows that we all have special qualities within us that only rise to the surface in the face of adversity.
All in all, I found this a short and pleasing read, a chance to travel back to a childhood favourite and revisit memories that still linger in spite of childhood left behind.