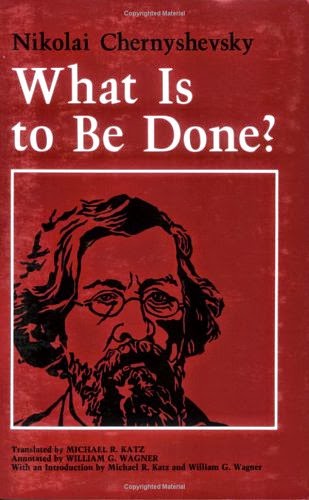 “On the morning of July 11, 1856, the staff of one of the large hotels near the Moscow Railway Station in Petersburg was in a quandary, almost in a state of distress.”

What do Chernyshevsky, Nietzsche and Star Trek all have in common? They all believe in socialist Utopias, in that if we all just could see the higher purpose of man and allow our characters to be developed beyond the animalistic tendencies of greed and selfishness and jealousy, we would all be able to lead this idealistic life with money, freedom, happiness and, in Nietzsche’s case, right-thinking for all. Everyone would get exactly what they wanted in all things, and gratification and joy would abound everywhere.  And this would all come in an erupting revolution that would change the world as we know it. Sounds good, doesn’t it?  Except that there’s one catch.  In all of history, men have never been able to shed all strife and avarice and enmity towards each other.  We have never been able to only do good, love mercy and walk humbly.  So how these people can expect this to happen in the rumblings of revolution, yet also in an easily perceived development of social change, is quite beyond me.  “Delusional”is the word that springs first to mind.

In Chernyshevsky’s, What Is To Be Done?, Véra Pálovna is a sheltered young woman with a strident, lower class, controlling mother.  Her mother tries to manipulate her with her machinations, but Véra, with stern self command unusual for her age and sex, manages to best her mother and ends up marrying a medical student and tutor, Dmítry Sergéich Lopukhóv, to escape her mother’s nagging domination.  While married to Lopukhóv, she starts her own sewing business, employing unusual business acumen to make it a success.  Likewise, her marriage is run in an unusual business-like way, to the apparent delight of both. Yet when their close friend, another medical student, Alexánder Matvéich Kirsánov, begins to form an attraction to Véra, an impending tragedy culminates, and finalizes in a most unexpected way.

Although What Is To Be Done? is almost unknown in classic fiction, among Russians it was considered one of the most influential books of nineteenth-century Russia for the ramification it had on human thought, and the effect it had on the history of the country.

Nikolai Gavrilovich Chernyshevsky was a staunch proponent of materialist philosophy, socialist political economy, and women’s liberation.  In his novel, he attempted to provide a remedy for all the social ills and the dilemmas that faced Russian society, believing that the controlling patriarchal hierarchy of the family, social inequality, and political and social problems were the main causes of the tyrannical, unbalanced, economic backwardness of the society. He disliked modern reform, advocating more radical steps.  Offering a blend of Russian traditional values, and ideas from Western Europe, he called for a social education that would bring sexual freedom, self-awareness, and prosperity.  However, his self-righteousness and intolerance of criticism eventually caused him to be barred from academia, and Chernyshevsky was forced to turn to journalism for an outlet.  His views eventually occasioned his arrest and he spent eighteen months in prison, which no doubt helped to advance him to the status of a martyr and enhanced the popularity of this book.  He became a symbol of the ultimate revolutionary Utopian socialist.

This book served not only as a platform for Chernyshevsky’s ideas, but it was also a response to Ivan Turgenev’s Fathers and Sons.  In Turgenev’s novel, Turgenev explores the relationship between reason and emotion, or perhaps how emotion can undermine one’s ideology.  In Fathers and Sons, both the nihilist Bazarov’s ideology and his underdeveloped grasp of emotion appear to cancel each other out, leaving him in a morass of ineffectuality in either.  In contrast, the nobleman Kirsanov reaches a level of contentment using a combination of idealism and reason, mirrored in his recognition of family values, the importance of nature and the land on which he lives. Chernyshevsky despised the novel and Turgenev’s portrayal of “new men”; with his novel, he strove to counter the portrayal, borrowing character names from Turgenev and metamorphosing Bazarov’s nihilism into rational egoism for what he thought allowed for more efficient action.  The ongoing debate continued with Fyodor Dostoyevsky’s response to What is To Be Done?, in his Notes from the Underground.

Perhaps I was suffering with extreme impatience with naive “genius” philosophers and writers, but the impatience only increased with Chernyshevsky.  Not only were his ideas born of some unrealistic fantasy, but the structure of his book was tedious.  The book wasn’t really a story, it was merely Chernyshevsky’s ideas.  Everyone is subordinate to his ideas, from his plot, to his characters, even his reader cannot escape.  While I know that authors control their stories, I like to feel their stories control them to some degree; that the story is born inside of them with not only the passionate ideas that they breed, but perhaps with an insight that is not quite explored or realized.  Then, voilà!  A “conversation” is begun between reader and writer. Yet, with Chernyshevsky, this certainly wasn’t the case.  Instead of speaking with you, he speaks at you.  In fact, he goes so far as to address his readers with an intentional condescension, not only confessing what he is doing to you with his prose, but leading you down garden paths of supposition, professing your own ideas and putting words in your mouth, then calling you an idiot because you followed what he was offering you.  I don’t understand it.  Often these people profess to know all the ills of society and all the solutions, but they have absolutely no social skills or even an appearance of love for humanity at all; or at least it doesn’t come out in their work.

I’m going to read Notes from the Underground next to finish this conversation. Dostoyevsky confuses me, but he has to be better than Chernyshevsky.  Doesn’t he ………???

Trilogy:
My Review of Fathers and Sons by Ivan Turgenev
My Review of What is To Be Done? – Nikolai Chernyshevsky

My Review of Notes From The Underground – Fyodor Dostoyevsky