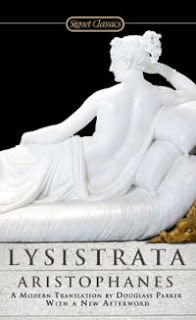 Staged during the Peloponnesian War and a mere two years after the disastrous defeat of Athens during the Sicilian Expedition, Aristophanes wrote Lysistrata ( Λυσιστραταη), meaning “disbander of the army”, as a protest against the waste of both resources and lives caused by the acts of war.

The play begins in the year 411 B.C., the twentieth year of the Peloponnesian War between the city states of Athens and Sparta, and the women of the participating factions are becoming disaffected by the incessant fighting.  Lysistrata, a woman of Athens, gathers neighbouring women from the areas of Sparta, Bœotia, Corinth, Peloponnese, etc. in protest of this gratuitous war.

As the women assemble, they choose the two most effective means of protest imaginable.  First, they vow to withhold sexual favours from their husbands as long as they continue to fight, and, showing dynamic, yet persuasive initiative, they take possession of the Athenian treasury located at the Acropolis, thereby terminating the flow of money and support to the embattled troops.

A chorus of old men arrive with the intent to force the women into submission but a chorus of old women repel them, and the reward for the men’s efforts is a good dousing with water.  A magistrate then censures the women for their unwomanly actions, however he takes time to question Lysistrata on her intentions.  Her response is a fascinating discourse on the strategy of women in the system of war.  Men, through their bumbling and entanglements, have made the war women’s business.  Not only is the war a wasteful loss of life, it is interfering with their social structure.  Athens should be organized as a woman spinning her yarn:  when the yarn is tangled it is untangled and now, Lysistrata demands, let this war be untangled by embassies.  Normally, the women would be pleased to remain at home with their work, but when the very fabric of their lives is unravelling and their existence threatened, action is imperative!

The magistrate is unmoved by her argument, Lysistrata returns to the Acropolis, and the old men and women continue their argument, until Lysistrata hears that there are already stirrings of dissent among her comrades, the women ready to disband because of the burden of a sexless existence.  Their leader argues them into submission, when Cinesias, a warrior, appears with his son, desperate for his wife, Myrrhine.  Myrrhine teases and taunts her poor husband with the promise of an encounter, then locks herself in the Acropolis with the other women.

A herald from Sparta arrives with an obvious “burden” under his cloak, announcing that he is seeking peace talks, and the exasperated magistrate agrees.  The Old Men make overtures to the Old Women, and the two choruses unite as one.  The Spartan and Athenian delegates call for Lysistrata, believing that she is the only one who can bring peace; she scolds them for their behaviour, appearing to put an emphasis on the Greek states fighting each other when the threat from Barbarians looms so greatly.  Finally, amid some squabbling, they agree to peace terms, and balance, both natural and societal, is brought to Greece once more amid much singing and dancing.

With Aristophanes’ characterization of Lysistrata and the mutiny and his emphasis on the war, the political posturing, the money wasted and the lives lost, rather than showing an empowered woman, he was attempting to show that the egregious irresponsibility of the behaviour of the men in charge was so ineffectual, that even a group of ungovernable women could be more successful in handling the problem.  However, in spite of the other women’s rather tenuous commitment to the cause, Aristophanes does show Lysistrata as a strong, decisive personality, immediately effecting peace and co-operation among the females of her fellow sister-states, organizing an orderly, yet believable, insurrection.  The women felt that they had as much invested in the war as the men, considering that they had been supplying the men for the war through giving birth to them and raising them to be warriors.  However, in the 21st year of the war, and the city devoid of most of the men of marriageable age, it is obvious that there is a serious inbalance not only in the natural order, but also in the social structures of Greek society.  While Aristophanes is perhaps not directly suggesting a remedy, he is certainly providing a compelling motivation to spur the leaders to action.

And, of course, Lysistrata cannot be mentioned without reference to its lewd content.  Well, perhaps I can gloss over it, not from a wish to, simply because I hardly noticed it.  Rather than pleading a certain disingenuousness, I blame my Dove Thrift Edition translation.  It claims an anonymous translator from 1912, and he must have sanitized his translation.  There are certainly references to “swellings of the groin” and “concupiscence” and “ardent longings”, but I didn’t notice a rudeness to any of the dialogue.  So I’m really not sure how much I missed or didn’t miss.

Lysistrata is considered “Old Comedy” which generally adhered to the following structure:

Prologos:  a prologue that begins the play with a dialogue based on the focus or theme
Parados:  a song sung by the chorus when it enters, or the moment when it enters
Episode:  a scene in which the dialogue involves one or two characters and the chorus
Agon:  a debate between characters
Parabasis:  an ode in which the chorus addresses the audience to express its opinion on the theme or topic, which could include views on politics, social trends, etc.
Stasimon:  a scene or scenes in which the chorus sings a song uninterrupted by dialogue and usually when other characters aren’t present
Exodos:  the exit scene, or final part of the play.

Yet while Lysistrata definitely fits into the Old Comedy form, Aristophanes deviates from the structure by employing a double chorus; departs from the conventional parabasis, and has an unusual structure for the agon, in that Lysistrata takes over the full debate herself to express her views, yet there are smaller agons within the double chorus.

All in all, Aristophanes has presented a well-balanced play where the comedy lightens the mood, but does not detract from the seriousness of prolonged war and all its wastes.  I liked this play much more than I expected to which seems to be a common theme when reading Greek literature.  I encourage all of you who haven’t read a Greek play, to read one.  You just might be surprised!