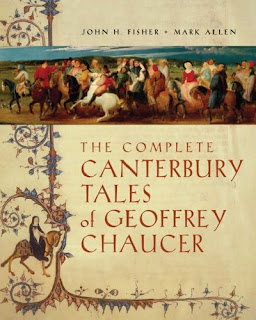 “Whan that April with his shoures soote
The droughte of March hath perced to the roote,
And bathed every veyne in swich licour
Of which vertu engendred is the flour;….”

Twenty-nine pilgrims and the narrator meet in Southwark, in Harry Bailey’s Tabard Inn, before setting off on a pilgrimage to Canterbury, where they will behold Thomas Becket’s shrine.  On the journey each pilgrim will tell four tales, two on the way there and two on the way back.  A free dinner will be awarded to the one with the best story.  And so begins Geoffrey Chaucer’s famous poem, a medley of lively stories that gives the reader a captivating window into 14th century England.

END_OF_DOCUMENT_TOKEN_TO_BE_REPLACED

As the pilgrims draw lots to determine who will be the first to tell their story, the first draw goes to the Knight.

And when this excellent man saw how it stood,
Ready to keep his promise, he said, “Good!”
Since it appears that I must start the game,
Why then, the draw is welcome, in God’s name
Now let’s ride on and listen to what I say.”
And with that word we rode forth on our way …

After being appealed to by a number of deposed queens and duchesses from Thebes, King Theseus of Athens attacks the city and gains victory over Creon, King of Thebes.  During the fighting, two knights named Palamon and Arcite, are taken prisoner and thrown into a dungeon.  Left to rot there forever, Palamon one day spies Emelye, who is as fair as any damsel and the sister of Theseus’ wife Hippolyta, and he falls in love.  Arcite, wondering at this cousin’s lovelorn look, spots her too, claims his love of her, and acrimony is born within the love triangle of the cousins.

Years later, Arcite is released by Theseus upon request of a friend, but is sentenced to exile from which he laments Palamon’s better fate of prison, due to his being able to gaze upon Emelye, whereas Arcite has now been denied that pleasure. Eventually he risks returning to Athens in diguise as a page named Philostratus, who enters Emelye’s household.  One day he comes upon Palamon, who has escaped, they begin to fight but are stayed by Theseus who announces that he will set up a grand tournament of knights, and the one who is the victor will win Emelye’s hand in marriage.

Meanwhile, we find, that while Emelye has been the centre of this strife and turmoil, that she actually does not wish to marry either knight.  She relates to the goddess, Diana:

“To whom are open earth and sea and sky,
Goddess of maidens, well you know that I
Desire to be a maiden all my life,
And never to be a man’s love nor his wife.
Among your followers I have kept my place,
A maid, in love with hunting and the chase
And to go walking in the greenwood wild
And not to be a wife and be with child;
For nothing will I have to do with man.
Now help me, lady, since you may and can.”

But while Diana could help her, she refuses, stating that Emelye’s destiny has been ordained to marry one of the knights, but which, she will not tell.  Emelye submits to her fate with good grace.

Palamon prays to Venus for victory, but we get a long description of Arcite in his battle attire before we hear of him offering sacrifices, and for him, it is to the god, Mars; so we have Palamon appealing to the goddess of Love, and Arcite appealing to the god of War.  Who do you think will win?

Ah, it appears that Arcite triumphs, bearing down Palamon and his knights, capturing him and taking him to the stake.  Venus is shamed with the outcome, but Saturn asssures her that she will also have her desire.  But how, with Palamon conquered and Arcite set to wed Emelye?

Well, Arcite has little time to enjoy his achievement.  Helmetless, he is pitched to the ground by his horse, landing on his head and receiving mortal wounds. He lasts a short time before succumbing, and Emelye and Palamon are in mourning.  But good King Theseus delivers a long speech about the Prime Mover and how all earthly beings must submit to the higher order of things. He blesses the wedding of Palamon and Emelye, and they live happily without jealousy and with extreme tenderness.

One can tell that there is much more to this tale than what is simple cloaking the surface.  First, there is the obvious emphasis on fate or destiny or a higher power:  Emelye, though she does not wish to marry, readily capitulates to Venus’ edict that she must; and, of of course, while it initially appears to all the people that Arcite will wed Emelye, there is a “blueprint” already in place for everyone’s destiny that man, in his puniness, cannot yet see.  A life lived well is to submit to the inevitable, yet take opportunities when they come to you.

There is also an emphasis on nature and it’s interaction with man.  The General Prologue initially drew us right into Nature and Spring “Whan that Aprille with his shoures sote, The droghte of Marche hath perced to the rote, And bathed every veyne in swich licour, Of which vertu engendred is the flour.”  From the sky and nature, we are then taken to be introduced to the earthly pilgrims.  In The Knight’s Tale, in the building of the sepulcher for Arcite, there is an obvious battle between nature and man, as Theseus fells the “old oaks” to make a funeral bier:

“You will not hear from me how all the trees
Were felled, nor how the local deities,
Nymphs, fauns, and hamadryads and the rest,
Ran up and down, scattered and dispossessed,
Nor how the beasts and wood birds, one and all,
Fled terrified when the trunks began to fall;
Nor how the ground stood all aghast and bright,
Affronted with the unfamiliar light ….”

There is a continuous tension between man and his environment, again perhaps due to either his lack of foresight, or his inability to understand the grand plan of the Prime Mover.

And, of course, in the battle between Arcite and Palamon and their gods, in spite of the appearance of war winning over love, it is love which achieves the ultimate victory.

I’m certain there are many other themes included, such as pageantry, hierarchical Medevial structure, and not so much the capriciousness of the gods, but the uncertainty of destiny, but I’ve probably explored this tale as much as I can for the first read.  One curious point struck me though ….. although this story is set in Greece, the gods are all given Roman names, instead of their Greek ones.  I have no idea why, but it is a puzzling choice.

The next tale up, is The Miller’s Tale …… 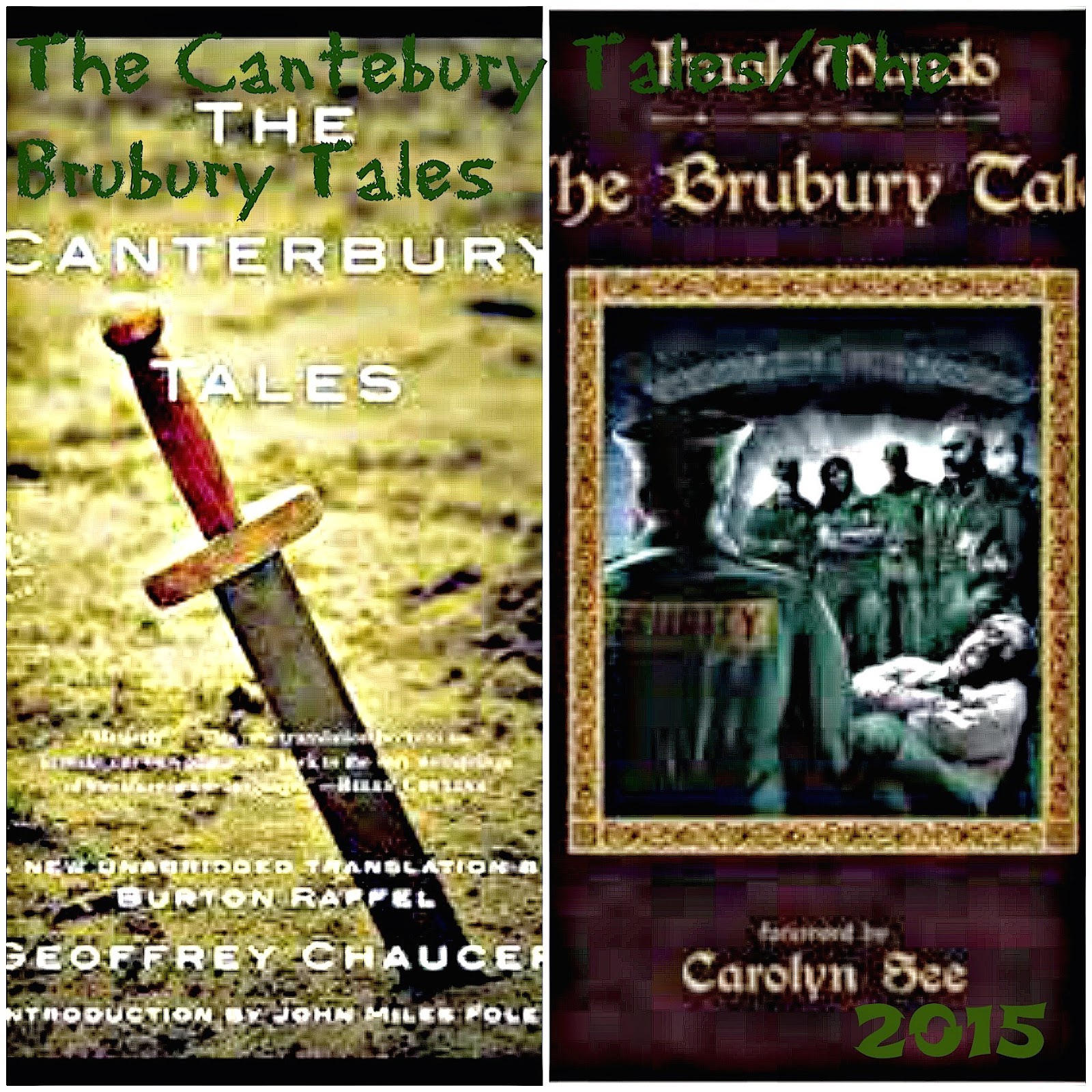 I’ve been meaning to read The Canterbury Tales for years but have been too intimidated to attempt them by myself.  I’ve looked for read-alongs and buddy reads but to no avail.  Then suddenly in one of my Goodreads’ groups, a new member joined who has written a book called The Brubury Tales, which is based on Chaucer’s The Canterbury Tales.  Voilà …… inspiration, and a person who can give me more insight into both reads!  Works for me.

The Brubury Tales, written by Frank Mundo, is a modern version of The Canterbury Tales, and for his work Mr. Mundo won the Poet Laureate Award Nomination from UCLA and CAL, Reader Views 2011 Reader’s Choice Award for Poetry Book of the Year, and the 2011 Bookhitch Award for the Most Innovative Poetry Book of the Year.  The LA Book Examiner said about his work, “a unique and powerful new book, The Brubury Tales draws upon Chaucer’s Canterbury Tales and classic stories by Mark Twain, Edgar Allan Poe and Charles Dickens, to name a few.  Frank Mundo takes risks with his writing, which is sensitive, thoughtful, and gritty.”

I have received nothing from Mr. Mundo in exchange for reading his book.  He has been a very valued member in the discussions in my Goodreads group and has never once even mentioned that he was an author, which increased my respect for him.  I can’t wait to start this paired read, probably around April or May of this coming year! 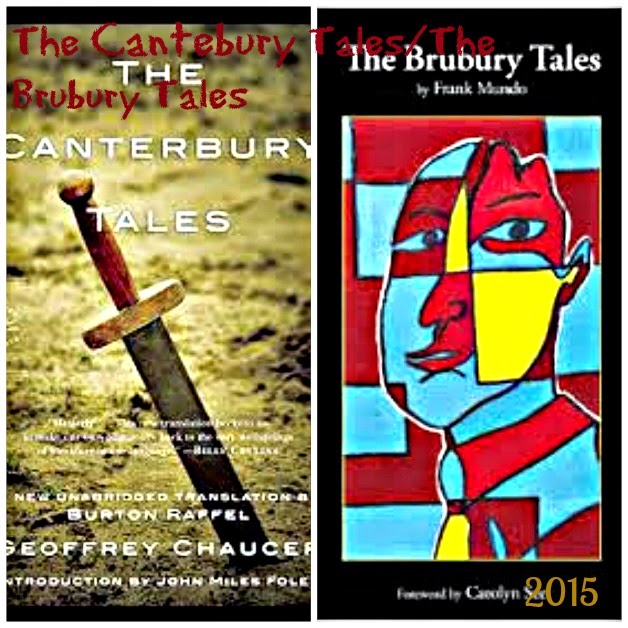