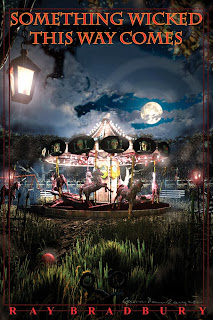 “The seller of lightning rods arrived just ahead of the storm.”

What better time to read this book than during the days leading up to Halloween.  I expected a terrifying, nail-biting, ride of horror but to my surprise, the story left me completely flat.

A carnival comes to a small town and two boys, Will & Jim, are anticipating its amusements; what they experience instead is an evil that almost defies their abilities to comprehend and their efforts to contain.  Finally, Will’s father, stumbles on a way to defeat the devious ghouls and all is saved ………. for now ……..

After reading up on Bradbury’s making of the novel, it was initially conceived as a screenplay.  Perhaps this is part of the reason why the book felt so awkward to me.  A visual conception full of lyrical language, darkness and evil, in a setting with conventional characters in a commonplace town ………. hmmmm ……..  Bradbury does not really explore any of the characters other than Jim, Will and his father.  Even the Illustrated Man, the leader of this nefarious group, is not developed past a description of him and a few instances where he is able to evoke fear.  And as for the language, the florid, and at times, awkward description was distracting from the plot.  Not that it couldn’t be used to an advantage, perhaps like a symphony or as even a Greek chorus, but Bradbury wielded it in a stumbling manner, interspersing it through both the characters and narrative alike.  An example:

“It was indeed a time between, one second their thoughts all brambled airedale, the next all silken slumbering cat.”

Well, okay, that’s a nice image but the reader has to pause and think how to apply it to the narrative.  It appears he is setting up the following sentences in the paragraph, which are a list of contrasts, but how does it really fit into the story?

“Since now learn otherwise.  Sometimes the man who looks happiest in town, with the biggest smile, is the one carrying the biggest load of sin.  There are smiles and smiles; learn to tell the dark variety from the light.  The seal-barker, the laugh-shouter, half the time he’s covering up.  He’s had his fun and he’s guilty.  And men do love sin, Will, oh how they love it, never doubt, in all shapes, sizes, colors, and smells.  Times come when troughs, not tables, suit our appetites.  Hear a man too loudly praising others, and look to wonder if he didn’t just get up from the sty.  On the other hand, that unhappy, pale, put-upon man walking by, who looks all guilt and sin, why, often that’s your good man with a capital G, Will.  For being good is a fearful occupation; men strain at it and sometimes break in two.  I’ve know a few.  You work twice as hard to be a farmer as to be his hog.  I suppose it’s thinking about trying to be good makes the crack run up the wall one night.  A man with high standards, too, the least hair falls on him sometimes wilts his spine.  He can’t let himself alone, won’t lift himself off the hook, if he falls just a breath from grace …………. Oh, it would be lovely if you could just be fine, act fine, not think of it all the time.  But it’s hard, right?  with the last piece of lemon cake waiting in the icebox, middle of the night, not yours, but you lie awake in a hot sweat for it, eh?  do I need tell you?  Or, a hot spring day, noon, and there you are chained to your school desk and away off there goes the river, cool and fresh over the rock-fall.  Boys can hear clear water like that miles away.  So, minute by minute, hour by hour, a lifetime, it never ends, never stops, you got the choice this second, now this next, and the next after that, be good, be bad, that’s what the clock ticks, that’s what it says in the ticks…….”

All in all, I didn’t hate the book but I found it distracting, disjointed, and poorly developed.  If I hadn’t read it, I wouldn’t have missed it.