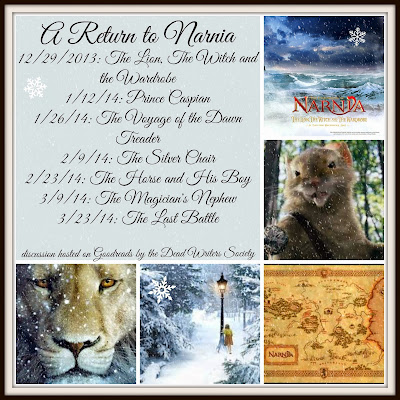 The above poster was created by The Moonlight Reader

Another project/challenge for 2014 is The C.S. Lewis Project.  This project was proposed by the wonderful moderators on my Goodreads book group, The Dead Writers Society .

C.S. Lewis is one of my favourite authors.  I began by reading some books from his Narnia Chronicles when I was young and later, as an adult, I read many of his theological books.  Not only is Lewis brilliant, but he is adept at communicating complex ideas and concepts in a way that is easily accessible to your average layperson …….. like me!  While he has definite opinions, which he supports using common sense and reason, he also is very gracious towards the people and groups with whom he disagrees.  The depth and variety of his subjects mean that each read through his books exposes layer upon layer of valuable insights that have just as much relevance today as when he wrote them.

The schedule for The C.S. Lewis Project 2014 will look like this:

September: Out of the Silent Planet
October: Perelandra
November: That Hideous Strength

December: God in the Dock: Essays on Theology and Ethics

Are you interested in participating?  Then come on over to The Dead Writers Society and join us!  We’d be glad to have you!

Update:  2015
I’ve enjoyed this project so much that I’ve decided to continue it indefinitely.  In 2015, I’ll try to read some of the Lewis books I missed in 2014, and then concentrate more on his scholarly work and essays.  Fun!