And so begins Dante Alighieri’s 14th century magnum opus, The Divine Comedy, which includes the books Inferno, Purgatorio, and Paradiso, telling of his travels through the depths of Hell and the mountain of Purgatory to discover the bliss of the Heavenly realms.

I attempted to review Inferno after my second read of it, yet never was able to put my thoughts together.  This time I was determined but without much more inspiration, however I believe I discovered why this poem is so difficult to review.  In essence, it is not only a poem; it is a story, it is history; it’s a science; it is a theological treatise, it is a creation.  As in the other two books, there are so many allusions and so many connections that Dante interweaves into them that, as modern readers, we become a little lost in a dark wood.  It’s like looking at a puzzle and having to see all the pieces individually before you can see the whole.  Without a knowledge of Italian, we can struggle; without a knowledge of medieval scientific theory, we can struggle, without a knowledge of Catholicism we can struggle.  But in spite of some of these challenges in this magnificent work, we can still see some of the pictures that Dante painted for us with bold strokes of artistic creativity.

END_OF_DOCUMENT_TOKEN_TO_BE_REPLACED 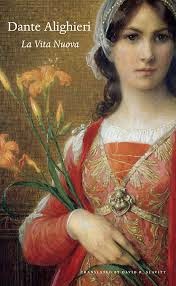 “In my Book of Memory, in the early part where there is little to be read, there comes a chapter with the rubric: Incipit vita nova.  It is my intention to copy into this little book the words I find written under that heading —- if not all of them, at least the essence of their meaning.”

Beatrice was eight years old and Dante, nine, the first time they set eyes on each other. Instantly, he felt an abiding connection with her, even though it was nine years after that before he finally saw her again, and she greeted him, her words entwining through his heart.  Lovely Beatrice, who became Dante’s love, his obsession and his Muse.   Never a conversation was had between them, only greetings, yet his life was filled with her presence, her goodness and grace, her being so angelic that she filled his heart until he wondered if it could contain her.  All thoughts revolved around his beautiful Beatrice; she was his life and through her, his poetry gained a new vitality.