“When a day that you happen to know is Wednesday starts off by sounding like Sunday, there is something seriously wrong somewhere.”

It seems like eons ago that I read a book by John Wyndham …… The Chrysalids, I believe it was …. and I should have remembered that it was weird.  Just like The Day of the Triffids.  Meat-eating plants with poison stingers and an odd way of transportation, not to mention a world-wide calamity that leaves most of the population blind. What could be stranger?

END_OF_DOCUMENT_TOKEN_TO_BE_REPLACED 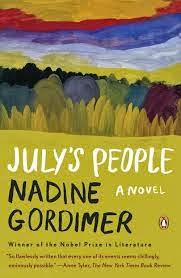 “You like to have some cup of tea?  —– July bent at the doorway and began that day for them as his kind has always done for their kind.”

In South Africa, the black South Africans have risen up against the whites, and the country is in chaos.  July, the servant of Bamford and Maureen Smales, secrets them out of the city and transport them to his village, in order to save their lives and the lives of their three children.  Nadine Gordimer’s novel was written before the end of apartheid in South Africa and is a fictional account of the beginnings of a civil war where the black South Africans have thrown the country into chaos as they attempt to abolish the apartheid system.

Honestly, I decided to read this book because it was on my Guardian’s 1000 best novel list.  In spite of having a few South African friends, I have only very cursory knowledge of South Africa or apartheid.  I was hoping to acquire a basic understanding of the country and its struggles in reading this book, but unfortunately no larger pictures of life or the people were revealed.  The narrative was somewhat choppy and disjointed, requiring effort to follow Gordimer’s train of thought, but also to follow in detail the action in the story.

Obviously there is no question about racial inequality with regard to the issues in South Africa, but I thought this book portrayed it in an unexpected way.  July had been a servant in the Smales house previous to the uprising and, while he had been treated well, he had been treated as such.  However, once he rescues the family, the roles invert and July gradually assumes more control of the situation, as the Smales are dependent on him for their livelihood and survival.  At climax of the novel,  July takes command of their yellow bakkie without their permission, and you sense that now they are completely in his power.  Yet with July’s increase in authority, there was really no exhibition of compassion or understanding.  One would think he would be able to see parallels in their situations and treat the Smales with an equality that had been lacking in their original treatment of him.  I’m really not sure what Gordimer was trying to communicate by this portrayal …….. that human nature is universal and unchangeable and that exploitation from one group can infect the victims if the tables are turned?  Are we so devoid of any sort of empathy and so self-centered, that no one can care about the freedom and identity of another person, no matter what the circumstances?  Sigh.  For me, Gordimer was not very clear with her intent, but perhaps that was the point.  In any case, the novel ends with Maureen Smales desperately running towards an unidentified helicopter that could carry South African police or revolutionaries.  Was she running to safety and freedom, or a different type of captivity, or even death?  Or perhaps she was simply wildly and mistakenly trying to run towards the life she once knew.

I honestly I can’t say that I enjoyed this read.  It was interesting in the way it is interesting to examine a dead insect, but nothing in it really spoke to my sympathies.   There was nothing beautiful in the writing that communicated the beauty of the country or the peoples, and no goodness shone through in the hearts of any of the characters.  I do realize that the dire situation in the country at this time may not have encouraged such writing, but people need hope in those times, and perhaps art that exemplifies that type of hope is never more necessary.