As I mentioned in my Books of Autumn post, after my C.S. The Four Loves read-along I’ve been interested in reading more books on the same subject with two in mind: The Art of Loving by Erich Fromm and On Friendship by Marcus Tullius Cicero. So with a little prodding (you know who you are, lol!) I’ve decided to host a read-along for both of them during the month of October.  It’s a little bit of short notice, I know, but The Art of Loving is a mere 120-ish pages and On Friendship is an essay, so please join in any time you can; if you can’t start on the 1st, it will be easy to catch up.

END_OF_DOCUMENT_TOKEN_TO_BE_REPLACED 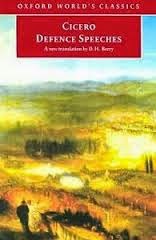 “I imagine you must be wondering, members of the jury, why it is that, when there are so many leading orators and men of the highest rank present here in court, I of all people should have stood up to address you; for neither in age, nor in ability, nor in authority do I bear comparison with these men who have remained seated.”

So begins, Cicero’s first speech, Pro Roscio Amerino, his first speech delivered in a criminal court when he was a young 26-year-old defence advocate.  While Defence Speeches contains five speeches that Cicero gave during the years 80 B.C. to 52 B.C., this speech is my favourite.  It shows Cicero as a fresh, young advocate, willing to take chances, yet also using his wiles to sway listeners to his point of view.  His rhetoric is at once firm and decisive, yet also almost self-effacing at times, but in an astute and cunning manner that only serves to increase his power.  His client, Sextus Roscius, was, in the end, acquitted of patricide, and this case helped begin Cicero’s journey to rhetorical fame. 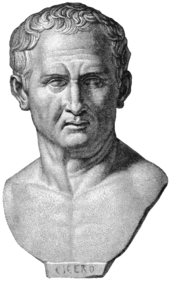 The defence speech, Pro Milone, is one of Cicero’s most famous, as he defended Titus Annius Milo against the charge of murdering the tyrant, Publius Clodius Pulcher.  It was an unusual defeat for him, but it is one speech for which we have an independent account from a 1st century scholar, Quintus Asconius Pedianus.  Because of the secondary source, we can target possible inconsistencies in Cicero’s presentation of the facts, which are backed by other evidence.  It is said that because the trial was so politically volatile and emotions so unstable, Cicero had to perform under unusual circumstances.  Ancient sources disagree as to the cause of Cicero’s less than stellar performance (some say threats from Clodian supporters, some say the soldiers stationed around the forum made him uneasy) but the end result was a vote of 38 to 13 of “guilty” and Milo was sent into exile.

In spite of the defeat, Milo did not seem to hold a grudge.  When Cicero sent a copy of this defence speech, written at a later date, to Milo, Milo joking replied that it was fortunate that a speech in that form had never been heard in court because he would then not be enjoying the wonderful mullets in Massalia (Marseilles – his place of exile).

If one is familiar with the history of Clodius, one can only conclude that Milo did the empire a favour by getting rid of him.  Suspected of committing incest with his sister, Clodius employed gangs to terrorize the citizens of Rome and the surrounding country, for his own political and monetary benefit.  In 63 B.C., he was able to exile Cicero for his involvement in the illegal execution of five Catlinarian conspirators, and while Cicero was away, proceeded to demolish his elegant house, attempting to have the ground consecrated to deny any further right to build upon the site.  Upon Cicero’s return, Clodius’ gangster tactics continued, as he regularly had his gangs harass Cicero’s workmen as they attempted to re-build his home.

Also included in this book are the speeches, Pro Murena, Pro Archia, and Pro Caelio, where he defends against electoral malpractice, illegal exercise of citizen rights, and civil disturbance, respectively.

From some of these speeches, the reader is given a window into Rome during its more turbulent times, and one realizes, among the grandeur, learning and sophistication, there is continual political unrest and moral decay, boiling in a cesspool of men grasping wildly for prestige and power. It’s a book that probably should be read in “doses”, but the value of the historical import and the insight into human ambition cannot be underestimated.