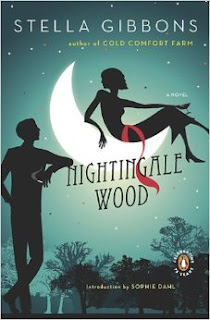 “It is difficult to make a dull garden, but old Mr. Wither had succeeded.”

Stella Gibbons writes rather odd books.  Cold Comfort Farm, her best known and highly acclaimed novel, follows an orphaned, pert young woman to a mucky, rural farm and observes while she neatens and tidies all the morose, lurking, and deranged occupants into their proper places, finding love in the process.  Gibbons has a knack for depicting rather unusual and sometimes bizarre characters, and this flair for the unique has continued in her writing of Nightingale Wood. The introduction to the story labels it as a “fairy tale” and it is, although not along the usual lines one would expect from such a tale.  Gibbons’ evil creatures often have angelic faces, and her happily-ever-afters can leave the reader uncertain of reality.  In playing with her characters, Gibbons appears to play with society and even the reader himself.  Her writing is not easily defined.

When Viola Wither finds herself a widow, parentless and very nearly destitute, she must accept the hospitality of her in-laws for her subsistence.  However, the Wither household is a quirky one, yet Viola, with her quiet and rather doe-eyed vacuity, manages to navigate the excessive expectations of her father-in-law, the ineffectualness of her mother-in-law and her two sisters-in-law, one who is a rather mannish, outdoorsy, opinionated woman, and the other a dull, thin, conventional woman with strangled hopes from an overbearing father.  Yet, in spite of the tedious country life she is forced to accept and Viola’s credulous and nascent view of the world, she somehow manages to find her Prince Charming in this unlikely place.

“It has been hinted that her nature was affectionate; now that it had received encouragement there was no holding it; she was in love, so much in love that she did not realize that it was Wednesday morning and the letter had not come; and that the man she was in love with was the legendary Victor Spring.  Victor had now become Him.  He was less of a real person than ever.  She never once thought about his character or his income or his mother.  She was drunk.  She wandered about like a dazzled moth, smiling dreamily, and running downstairs when the postman came, crying:  ‘Anything for me?'”

Right away, we notice that Gibbons fairy-tale has some rough edges, that will never be filed smooth.  It is romance, but romance with an uncomfortable twist.  While Viola’s Prince Charming is not only handsome, debonair and rich, he’s also engaged to be married.  And although he is physically attracted to Viola, he doesn’t even seem to remember her name.  His reaction to Viola after the ball is not one of an idealized lover:

“He was most strongly attracted to her, but not romantically.  The intentions of the Prince towards Cinderella were, in short, not honourable: and as we have seen, he thought it the prudent thing not to see her.

However, this story is not only about Viola, and the Withers.  We have a number of other unconventional characters who populate the pages of this unique novel:  Hetty, Victor’s cousin who loves books and her family not so much; Saxon, the young, handsome chauffeur whose family has come down in the world, as he tries to manage his rather slovenly, yet sexually indiscriminate mother; the loud and dirty woodland Hermit who takes great delight in terrorizing the gentry with his insightful, yet indelicate observations; and many, many more colourful personalities.  It’s a kaleidescope of the English country life of the 1930s, but while the surface is nice and tidy, underneath there are swirling passions, undisclosed sentiment, and hidden resentment.

Certainly the novel has a fairy tale flavour to it, sprinkled with hyperbole, but Gibbons ensures that she imbues it with a healthy dose of realism.  In a lovely fantasy-style, Gibbons bestows on each character their heart’s desire, yet the outcome of their desires are firmly entrenched in the reality of the 1930s, and their desires can perhaps turn out not to be as desirable as first expected.  On one hand, Gibbons shows incredible insight by investigating human desires, and then showing us how capricious the hand of fate can be, and how indiscriminate human nature can be, yet sometimes she doesn’t seem to like her characters, almost manipulating and abusing them in a way that makes you wary of liking them, even if you wish to.  Reality descends on the characters, but often they seem to reject it, living inside a mental shell of their own making.  It’s sort of an odd experience.  I feel that I’ve witnessed an explosion of Dodie Smith meets Virginia Woolf and I’m not sure if I like it.

Having written over 20 novels, Gibbons was rather annoyed that none of her other works received the attention of Cold Comfort Farm, yet perhaps the criticism is somewhat deserved.  While I enjoyed this book, I felt that it was difficult to really get to know any of the characters.  Perhaps this mental barricade was due to the radical treatment that Gibbons gives her characters, pressing the loud pedal at one time, and the soft at another.  Just when you think you have a character sketched, they behave in a way completely unexpected and you have to start all over again with a likeness.  The characters themselves struggle not only within the definitions Gibbons imposes on them, but societal definitions and self-definition, so the read becomes somewhat unsettling.  A fairy tale, yes, but a splintered fairy tale, where actuality rears its ugly face and blows away the clouds of expectations.