“I am blind and old, Antigone, my child.”

Now blind and aged, Oedipus, with his daughter, Antigone, arrive at a place just outside of Athens called Colonus.  Though warned by a villager that this place in which they wish to reside is sacred, possessed by the all-seeing Eumenides (Furies), a land of Poseidon and Prometheus, and the founding stone of Athens, Oedipus refuses to leave.  A past prophecy has determined that the sacred grove of the Eumenides at Colonus, will be the site of his death, and here he is determined to stay.

When a chorus of men of the city arrive and, upon learning the identity of Oedipus, they attempt to persuade him to depart from their city, fearing his curse will bring trouble to them.  Oedipus defends his position by agruing that because he had no knowledge of his crimes, he is therefore not responsible for the consequences, in particular, claiming self-defence in the murder of his father, Laius.

But lo, into the fray rides his daughter, Ismene, bringing news that Oedipus’ youngest son, Eteocles, has seized the throne of Thebes from the elder, Polynices, and both sons have heard from the oracle that the outcome of their conflict will depend entirely on the location of their father’s burial.  Yet there is more treachery!  Creon (brother-in-law to Oedipus) is, as she speaks, on his way to ensure that Oedipus will be buried at the border of Thebes, without the ceremony, in an attempt to negate the oracle’s proclamation.

Denouncing them all as villains, Oedipus meets with Theseus, King of Athens who shows sympathy for his predicament, offering unconditional protection and making him a citizen of his country.  How Oedipus praises his saviour, and declares that his beneficent actions will ensure Athens victory in any altercation with Thebes!

When Theseus exits, Antigone announces the advent of Creon.  At first, he attempts to manipulate Oedipus using pity, but when he sees this tact will not bring him success, he admits to kidnapping Ismene, and grabs Antigone to forcibly take her away.  Theseus returns in kingly grandeur to scold Creon, then the Athenians overpower the Thebians, returning both girls to their father.

One thinks that at last Oedipus might get some peace in his last hours, but it is not to be.  Informed by Theseus that a suppliant has arrived to speak with him, he learns it is his son, Polynices, who begs his father to release the curse he had placed on his sons for their part in his banishment from Thebes, knowing that their conflict is a result of the curse.  Oedipus, in complete disgust of his offspring, refuses and Polynices exits to meet his near-certain fate.

A thunderstorm ensues, which portends Oedipus’ passing.  Oedipus gifts Theseus with the promised gift of protection for Athens and then passes into Hades.  When Antigone wishes to see his tomb, Theseus refuses in response to a promise to Oedipus, never to reveal the location of his tomb.  Antigone departs to attempt to stop her brothers’ conflict.

There is a curious dichotomy in this play with regard to the character of Oedipus.  In spite of the fact he is an exiled, blind old man, with a terrible curse upon him, rarely do you find him subject to the other characters.  In fact, Antigone listens closely to his counsel, he has a command and influence over Theseus, he manages to overcome Creon, and also best his son by refusing to assist him.  On the outside, he is aged, infirm and at the mercy of his hosts, but in actuality, Oedipus is the master of each situation.

Yet Oedipus also places emphasis on his innocence with regard to his crimes.  Again and again, he proclaims to the chorus of Athenian men that he had no pre-knowledge of his transgressions and was, therefore, blameless.  This was a different reaction from Oedipus Rex, where he seemed to take the crimes on to himself, and punish himself for them.

While on one level, the trials and sufferings born by Oedipus seemed somewhat random in Oedipus Rex, in Oedipus at Colonus we see a culmination of prophecy.  By his exile, Oedipus is brought to the sacred grove of the Eumenides (Furies), fulfilling prophecy, and although this exile was brought about by a curse, Oedipus is actually turned into a hero-type figure by bringing blessing and protection upon the important city of Athens.

Of the 123 plays that Sophocles wrote, only seven complete plays have survived.  That makes me want to cry.  However, parts of plays are still being discovered.  In 2005, additional fragments of a play about the second siege of Thebes, Epigoni, were discovered by employing infrared technology by classicists at Oxford University.  So there is hope that the ancients can still speak to us through time (and new technology) and, as Gandalf said, that is a very comforting thought, indeed!

The book was completed for my Classics Club Spin #6. 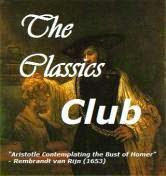 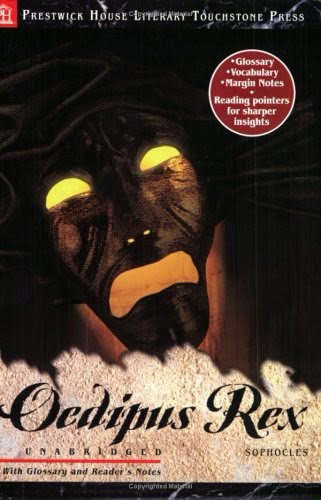 “Children, young sons and daughters of old Cadmus, why do you sit here with your suppliant crowns?”

A dark curse is upon Thebes.  Blighted cattle and plants cover the land, the women are barren and a deadly plague creeps throughout the kingdom, sparing no one in its fatal grasp.  Creon, brother-in-law to King Oedipus, reveals that the curse placed on the kingdom is a result of the murder of its last king, Laius, and until the perpetrator is found, there is no hope of relief from their present woes.  Oedipus, king of Thebes, calls the wisest man to the palace, the blind prophet, Teiresias, to discover the identity of the vile culprit.
Yet through wise Teiresias and the shepherds of Laius, it is revealed that Oedipus was unwittingly the killer, slaying the king on a road to Thebes, in self-defence and completely unaware of his victim’s identity.  Unbeknownst to Oedipus, he was fulfilling a prior prophecy, that he would kill his father and marry his mother.  And true to prophecy, Oedipus, after freeing Thebes from a different curse by solving the riddle of the Sphinx, became the new king of Thebes and married the current queen, Jocasta, also his mother.

Upon hearing the fulfillment of the curse, a stunned and horrified Oedipus flees, yet soon finds Jocasta has hanged herself with shame and, grabbing the brooches from her garments, dashes his eyes out until blood flows in rivers down his face. At the behest of Oedipus, Creon banishes him from the city.

The sins of murder and incest has blighted the life of Oedipus and the lives of his progeny; his sons will be left without a father or inheritance and his daughters will be ostracized, unable to marry.  His anguished speech carries notes of his misery and devastation:

“What can I see to love?
What greeting can touch my ears with joy?
Take me away, and haste —– to a place out of the way!
Take me away, my friends, the greatly miserable,
the most accursed, whom God too hates
above all men on earth!”

The state of blindness and the character of Oedipus are closely linked. Instead of listening to the wisdom of the blind prophet, Teiresias, Oedipus refuses to believe him, therefore choosing blindness over knowledge.  Later in the play, when he accepts the knowledge of his actions, he physically blinds himself, which echoes his emotional blindness earlier in the story.

Can one commit a crime with complete lack of awareness and still be responsible for the repercussions of his actions?  Is the harshness of Oedipus’ penalty and the suffering he endures from the consequences, a justifiable outcome given the circumstances?  Why does no one in the kingdom disagree with the punishment of Oedipus, and appear more shocked by the unintentional sins than the maiming he inflicts upon himself?

What we can take away from this drama is helplessness in the hands of fate.  Though everyone pities Oedipus and does not blame him, there is nothing they can do in the face of his punishment.  To the Greeks, fate is supreme and unaffected by human choice; Oedipus attempts to avoid his destiny yet only succeeds in bringing it to fruition.  Finally, we are exposed to a chilling Greek worldview, that we can “Count no mortal happy till he has passed the limit of his life secure from pain.”

Apparently Oedipus Rex, while first chronologically of the three Theban plays, is in fact the second in written order.  I will enjoy trying to find out the common threads between the three, and if I feel there are any inconsistencies due to the fact they were composed out of order.  The next one on the schedule is Oedipus at Colonus where we meet Oedipus in exile.