In An Apology for Idlers, Stevenson takes up the call to support and promote idlers, however not idlers in the common sense.  Idleness “does not consist of doing nothing, but in doing a great deal not recognized in the dogmatic formularies of the ruling class …”  There is a great deal in favour of diligence but there is also something to be said against it; Stevenson has picked up his pen to do so.

Stevenson first targets school, saying that books are all well and good in their place but “they are a mighty bloodless substitute for life”.  The streets give just as good an education, as Dickens and Balzac discovered, as you can learn to see things from a new perspective.

END_OF_DOCUMENT_TOKEN_TO_BE_REPLACED

“On a certain afternoon, in the late springtime, the bell upon Tunstall Moat House was heard ringing at an unaccustomed hour.” 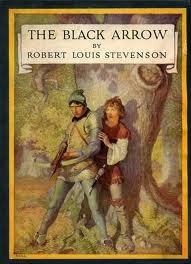 On my goodness, where do I start?

The Black Arrow is set during the War of the Roses and follows Dick (Richard) Shelton, a young man who discovers that his guardian, Sir Daniel Brackley, is actually responsible for his father’s death.  Dick sets out, not only to seek revenge, but to rescue the beautiful Joanna Sedley from his guardian’s clutches.  In his quest, he gets embroiled in “The War of the Roses,” the battle between the House of York and the House of Lancaster for the English throne and poor Dick must decide which side deserves his loyalty.  An interesting cast of characters assist or impede him on his journeys until he is able to overcome his struggles: win his bride, gain justice for his father and receive a knightship in the bargain.

On one hand, the novel is ripe with the promise of a wonderful adventure: a handsome young man, a romance, an historical battle, power struggles, revenge, trust, loyalty, and betrayal.  However, the manner in which Stevenson crafted this novel is rather bumbling.  There is little introduction to the setting; the characters are plunked into the story with a very brief background; perilous situation after perilous situation is fired rapidly at the reader with sketchy development; and the characters’ actions are contrived to move the plot along rather than with the intent to build strong, plausible characters.

For example, in one particular scene, on the drop of a coin, Dick decides to steal a ship (which no one really knows how to sail), attacks a well-fortified castle, with the result that he barely escapes with his life and ends up shipwrecked.  The skipper from whom he stole the ship is ruined, and it is only when Dick sees the culmination of his actions that he feels any remorse.  A matter of the ends justifying the means, which never sits well with me.

Stevenson himself disliked the book, describing it as “tushery” or the affected use of archaic language. The fact that he wrote it while in the grip of a debilitating case of influenza might act as an excuse for his sub-par creation:

“The influenza has busted me a good deal; I have no spring, and am headachy. So, as my good Red Lion Counter begged me for another Butcher’s Boy-I turned me to-what thinkest ‘ou?-to Tushery, by the mass! Ay, friend, a whole tale of tushery. And every tusher tushes me so free, that may I be tushed if the whole thing is worth a tush. The Black Arrow: A Tale of Tunstall Forest is his name: tush! a poor thing!”

Personally I did not have a huge issue with his use of language, it was more the fact that Stevenson’s prose took the appearance of a run-away train and left the reader little time to breathe, as well as the lack of a guide for the readers by giving them merely the faint whiff of background for the story and the characters.  It is worth a read but read it with no expectations; if you anticipate another Treasure Island, this isn’t it.  Sorry, Robert!