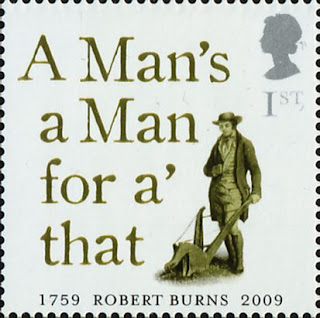 Burns challenges the popular premise that a man’s worth lies in his birth or employment or station, instead emphasizing that the measure of a man lies in his character.  From the beginning of the poem, the poor man is first presented in a lowly, yet honest manner, but as the poem progresses, Burns gradually elevates him until he has pride of worth and is looking down on the respected gentleman.  In fact, Burns actually inverts the class structure and hierarchies of rank, calling the poor honest man a “king”, and the rich “fools” and “knaves”. The qualities of honesty and unrewarded toils of the poor man make him inherently a man of greater character and therefore, worth, compared to the entitlements and indiscretions of the gentry.  Burns egalitarian principles shine through with his claim, “that man to man, the warld o’er, / Shall brithers be for a’ that” echoing his radical politics and his sympathy for the French Revolution that was still in progress during the time of his song’s publication in the Glasgow Magazine in 1795.   In fact, Burns must have been wary as to how this song would be perceived by his detractors, as he originally chose not to have his name attached to it.

Here’s a wonderful reading by David Rintoul (of Doctor Finlay fame) of A Man’s A Man For A’ That:
Deal Me In Challenge #6

This is my first choice for the Deal Me In Challenge.  It is a poem put to song based on a familiar song that Burns had heard.  It’s structured in four quatrains (four-line stanzas).  Using similes and hyperbole, the writer expresses his great love for a fair, “bonnie lass” and the poem’s repetition enforces his feelings.  Initially he likens his love to a rose, a melody, and then declares the endurance of that love.  At the end of the poem it seems the writer has to go away for awhile, which is perhaps why he has written the poem. so that his sweetheart will know the strength of his feelings and of his constancy.

So far my favourite Burns poem is To A Mouse, but I really appreciate the straight-forward honesty of this one.  I’m so used to little teasings and wittiness from Burns, but this poem is quite delightful!

And for Marianne, here is the poem put to music (the poem begins at about 0:40, for those who don’t like long introductions):

Deal Me In Challenge – Queen of Diamonds #1