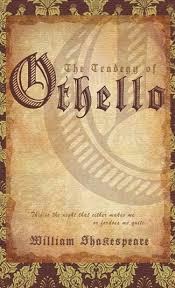 “O, beware, my lord, of jealousy;
It is the green-ey’d monster, which doth mock
The meat it feeds on.”

Othello the Moor is lauded over Venice for his help in attempts to rid them of the pesky Turks in their battle over Cyprus.  Yet when Othello weds the beautiful Venetian Desdemona in secret, some opinions of his prowess change, notably those of Desdemona’s father.  And unbeknownst to Othello, Iago, his third-in-command, is plotting a dastardly revenge for being passed over for promotion, the position being given to Othello’s loyal lieutenant, Cassio.  Hence proceeds perhaps the most shocking example of manipulation in literature, as Iago takes possession of Othello’s mind and emotions, like a beast taking possession of its prey, transforming our noble Moor from a honest, straightforward, respected man into an enraged, vengeful monster who believes every evil of his innocent wife, including her unfaithfulness with his second-in-command, Cassio.  Othello’s jealousy manages to eclipse anything within our understanding.

Iago reveals that, as well as the injury of being passed over for promotion, he also harbours a suspicion that Othello has been sleeping with his wife, Emilia, who is Desdemona’s lady-in-waiting.  There is no proof of this accusation in the play, and it is likely that Iago is expecting people to act with the same lack of integrity and base bestial urges, that he himself would, in the same circumstances.

How does a gentle and admired military leader allow himself to be reduced to a maddened beast, his fury leading him to commit the worst atrocity against a perfectly innocent human being, and one who has loved and supported him through their short marriage?  What hidden button inside Othello’s psyche has Iago discovered and pushed, knowing that it will make him snap?

Certainly there are various issues that come into play and work against Othello.  He is used to being a commander, yet is unused to being a husband and obviously, when in love, is out of his depth.  Perhaps he sees Desdemona as a possession that he has conquered and, instead of being able to relax in his marriage, he, like a military leader, feels that he must wage battle to keep her.  And when difficulties do arise, instead of trying to search out the truth, he acts like a military leader and attempts to “conquer the enemy”.  He has insecurities that lead to him being a willing pawn of Iago’s machinations. The jealousy that Iago is able to set aflame within him, corrupts his normal good sense and his actions become intemperate.  I certainly have compassion for his state, as I believe these aspects have severely affected his decison-making and emotional state, but, that said, he is still human and he still has the option of choice.  He knows right from wrong, yet he decides to allow his emotions to rule and himself to be led down the tragic path of mindless jealousy.  In reality, he allows himself to turn into a beast.

Shakespeare’s exhibits an uncanny ability to weave endless possibilities into a Gordian knot of drama and draw the reader into his poetic spell.  Will we ever know exactly what motivated Othello and his spiral from an honourable man to a madly jealous murderer.  Will we ever understand why he believed Iago without any “ocular proof”?  What happened to the military commander that must have been used to exhibiting self-control?  Do intense emotions subvert our ability to act as a human beings?  There are so many avenues to explore and no obvious or set answers.

Of all the characters in the play, my favourite character was Emilia.  While she remains surprisingly unaware of the plotting and intrigues of her husband, upon realizing the truth, she becomes the voice of the audience, who has until this point been mute in horror, and satisfyingly spews vile recriminations on the head of Othello.

T.S. Eliot had a different view of the last actions of Othello than many older critics:

“I have always felt that I have never read a more terrible exposure of human weakness — of universal human weakness — than the last great speech of Othello.  I am ignorant whether any one else has ever adopted this view, and it may appear subjective and fantastic in the extreme.  It is usually taken on its face value, as expressing the greatness in defeat of a noble but erring nature. What Othello seems to me to be doing in making this speech is cheering himself up. He is endeavouring to escape reality, he has ceased to think about Desdemona, and is thinking about himself. Humility is the most difficult of all virtues to achieve; nothing dies harder than the desire to think well of oneself. Othello succeeds in turning himself into a pathetic figure, by adopting an aesthetic rather than a moral attitude, dramatising himself against his environment. He takes in the spectator, but the human motive is primarily to take in himself. I do not believe that any writer has ever exposed this bovarysme, the human will to see things as they are not, more clearly than Shakespeare.”

I read this play as part of a Shakespeare: From the Page to the Stage course that I’m taking online, and it’s definitely moved in among my favourites!

In preparation for starting my MOOCs course, Dante’s Journey to Freedom Part I, I thought it might be a good idea to do some pre-reading about Dante, his world and the poem itself, and it took me less than a second to decide who I wanted to take me there.  In spite of being known for his children’s and theological books, C.S. Lewis’ specialty was actually Medieval and Renaissance Literature.  In fact, his knowledge was so respected that Magdalene College at the University of Cambridge created a chair especially for him.

I’m not sure how interesting this post will be for people who aren’t interested in Dante, but I thought it would be a good reference for myself as Lewis’ lecture contains some very detailed information.  If anyone makes it to the end you win a prize of a virtual pat on the back and my enduring gratitude! 😉

The simile is a poetic device that is used for illustration.  It can fall into three categories:

>  straight similes built on ancient principles
>  a state or action in the story is compared to a state or action that can
be observed in external nature, whether animate or inanimate
>  short by Virgilian standards

>  illustrations of a traveler
>  introduced in plain, business-like manner, simply in order to make the
meaning of the writer as clear to the reader as it is to himself
>  a vividness that produces the maximum of illusion
>  immediate impact on the senses
>  connections purely pictorial
>  eg.  ”  As frogs confronted by their enemy,
the snake, will scatter underwater till
each hunches in a heap along the bottom.”
Inferno IX, line 76 (Mandelbaum)

>  one emotion is compared with another
>  Homer and Virgil rarely used this form (Homer only once)
>  eg. #1  “so-and-so feels in this situation just like I would feel in that
situation in ordinary life”
>  eg. #2  ”  At that he turned and took the filthy road
and did not speak to us, but had the look
of one who is obsessed by other cares”
Inferno IX, line 101-103 (Mandelbaum)
** illustrates psychological and pictorial simile combined **

>  things are linked together by a profound philosophical analogy or even
identity
>  “like” in these similes turn into “same”
>  relation between things is one of response or correspondence, like that
of a mirror image to a real object or, (as Dante says) of shadow to
body
>  “… in the greatest Dantesque similes, the longer you look the greater
the likeness becomes and the more fruitful in thoughts that are
interesting as long as you live.” p. 72
>  eg.  In Paradiso, Beatrice gazes at the sun and Dante, who was gazing
at Beatrice, imitates her and also gazes at the sun.  The process
whereby Beatrice’s gaze produces Dante’s is compared to the
process of reflexion by which one beam begets a second.  And
this second beam is in its turn compared to a pilgrim desirous of
return.  Dante and Beatrice are literaliter [literal] to the sun (and
allegorice [allegorical] to God) what all reflected beams are to the
original source of light and what Dante is literaliter to Beatrice
and the human understanding allegorice to Wisdom and the
whole universe is to the Unmoved Mover.  The whole of
Christian-Aristotelian theology is brought together.  The image
reverberates from that one imagined moment over all space and
time, and further.

Definitions:
ectype – copy from an original

“There is so much besides poetry in Dante that anyone but a fool can enjoy him in some way or other ….” p. 75

“If bees were associated only with honey and not with stings, I should say that Dante every now and then wakes up a whole beehive, by giving us some image which seems to focus all the rays of his universe at a single point or touching some wire which sets the whole system vibrating in unison.” p.73

On the Virgilian simile:  “Clearly, when it has reached this stage, the original purpose of illustration has become a mere excuse, though an excuse still necessary to lull the logical faculty to sleep, and the real purpose of simile is to turn epic poetry from a solo to an orchestra in which any theme the poet chooses may be brought to bear on the reader at any moment and for any number of purposes” p. 66

“It is hard for a translator to ruin the great passages in Dante as every translation ruins Virgil.” p. 76

“I think Dante’s poetry, on the whole, the greatest of all the poetry I have read:  yet when it is at its highest pitch of excellence, I hardly feel that Dante has very much to do.  There is a curious feeling that the great poem is writing itself, or at most, that the tiny figure of the poet is merely giving the gentlest guiding touch, here and there, to energies which, for the most part, spontaneously group themselves and perform the delicate evolutions which make up the Comedy.” p. 76

” ….. I draw the conclusion that the highest reach of the whole poetic art turn out to be a kind of abdication, and is attained when the whole image of the world the poet sees has entered so deeply into his mind that henceforth he has only to get himself out of the way, to let the seas roll and the mountains shake their leaves or the light shine and the spheres revolve, and all this will be poetry, not thing you write poetry about ……….  We are made to dream while keeping awake at the same time.” p. 76-77