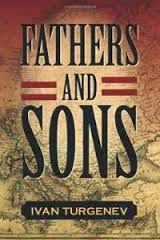 “Well, Piotr, not insight yet?” was the question asked on May the 20th, 1859, by a gentleman of a little over forty, in a dusty coat and checked trousers, who came out without his hat on to the low steps of the posting station at S—–.”

What sort of relationship do you have with your father?  Is it one of respect, deference, and honour, or do you think his ways too traditional, his thought process too archaic, and to keep a tentative understanding between you, do you have to employ a somewhat forced amiability, while underneath feeling an impatient scorn?

In Fathers and Sons, Turgenev examines the ideas of the new and old, progress and stagnation, and generational differences.  Yet while Turgenev portrays these conflicts within families and people, the themes echos the struggles that were occurring in Russia itself, between the common liberals and a nihilism movement that was growing and expanding at an alarming rate. Immediately the reader is tossed into the battle and while you expect to be buffeted to-and-fro between the two forces, one is surprised to find a more gently tossing, a disturbing reminder of how subtly, yet how pervasively this new philosophy could spread into the ideas and actions of the people.

Arkady Nikolaitch returns home from university with his good friend, Bazarov, a self-confessed nihilist, who issues a dripping contempt for most people around him.  Arkady maintains a good relationship with his father Nikolai Petrovitch and his uncle Pavel Petrovitch, yet through Bazarov’s influence he begins to question what he values about their antiquated thought and primitive ways.

With Bazarov’s nihilistic charm and new trendy ideas, his challenging of the status quo makes him a hero of the younger generation, while the older regard him either as dangerous, or rather like an unusual specimen that they can’t quite figure out.  Yet, in spite of renouncing life and its perceived useless order, we find that Bazarov is unable to escape it.  While visiting the house of a widowed woman, Anna Sergyevna Odintsov, he becomes enamoured of her, his emotion overriding his philosophy and eroding some of its immutable strength.

Turgenev does a masterful job of having nature interplay with the characters, their ideas and emotional struggles.  For example, Bazarov is blind to the beauty around him  He merely uses nature, as he engages in his hobby of dissecting frogs,  pulling Nature itself apart to examine its inner workings.  He can only appreciate the slaughtered bits, but is unable to interact with the whole, Nature as life and beauty.

I don’t believe that Bazarov’s nihilism was a true nihilism.  He obviously wanted to reject the status quo and, in fact, had a quarrel with it, which is apparent in his simmering anger when he speaks about it.  He doesn’t just want to contradict it, he longs to disparage it.  His philosophy is a quasi-nihilism that supports his self-importance and that he uses more as a crutch. He is passionate about it but appears to use it merely as a play for power.  He has developed a philosophy, which is truly an anti-philosophy that prevents him from interacting with life itself.

While with Tolstoy and Dostoyevsky you often feel buffeted by the high emotion or deep philosophy, Turgenev’s approach is more gentle, lulling his ideas into the reader’s head with his pastoral description, and lyric pace.  Yet for being gentle, it is no less powerful.  Turgenev has conducted a true masterpiece!

Trilogy:
My Review of Fathers and Sons by Ivan Turgenev
My Review of What is To Be Done? – Nikolai Chernyshevsky
My Review of Notes From The Underground – Fyodor Dostoyevsky 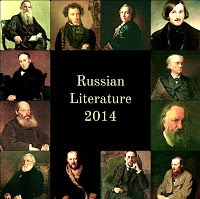