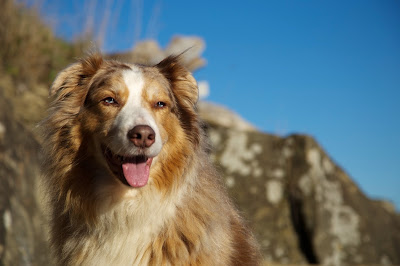 Crossing the Bar
By Alfred, Lord Tennyson
Sunset and evening star,
And one clear call for me!
And may there be no moaning of the bar,
When I put out to sea,
But such a tide a moving seems asleep,
Too full for sound and foam,
When that which drew from out the boundless deep
Turns again home.
Twilight and evening bell,
And after that the dark!
And may there be no sadness of farewell,
When I embark;
For tho’ from out our bourne of Time and Place
The Flood may bear me far,
I hope to see my Pilot face to face
When I have crost the bar. 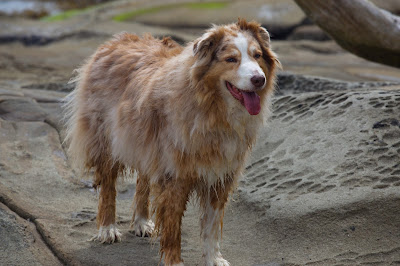 Music
By Ralph Waldo Emerson
Let me go where’er I will
I hear a sky-born music still:
It sounds from all things old,
It sounds from all things young;
From all that’s fair, from all that’s foul,
Peals out a cheerful song.
It is not only in the bird,
Not only where the rainbow glows,
Nor in the song of woman heard,
But in the darkest, meanest things
There always, always, something sings.
‘Tis not in the high stars alone,
Nor in the cups of budding flowers,
Nor in the redbreast’s mellow tone,
Nor in the bow that smiles in showers,
But in the mud and scum and things
There always, always, something sings. 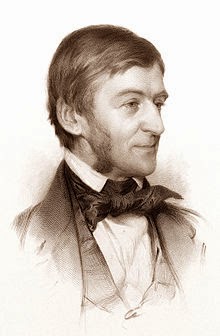 This essay is my sixth read for my Deal Me In Challenge 2015.

Oh, what flowery and majestic rhetoric flows from the pen of Ralph Waldo Emerson in this essay on friendship!  Emerson was a transcendentalist and his views colour nearly every sentence of this beautiful yet perhaps rather hyperbolic essay on friendship.

Transcendentalism is a religious and philosophical movement that developed during the late 1820s and ’30s[1] in the Eastern region of the United States as a protest against the general state of spirituality and, in particular, the state of intellectualism at Harvard University and the doctrine of the Unitarian church as taught at Harvard Divinity School.

Among the transcendentalists’ core beliefs was the inherent goodness of both people and nature. They believe that society and its institutions—particularly organized religion and political parties—ultimately corrupt the purity of the individual. They have faith that people are at their best when truly “self-reliant” and independent. It is only from such real individuals that true community could be formed.

I knew almost nothing about Emerson before I read this essay.  I had the vague idea that he was a naturalist and perhaps a deist, and the only thing I knew for sure was that he was one of Pa Ingalls favourite authors.  I had expected his writing to be rather sparse and serious, so l was rather amazed at the waxing lyrical prose to which I was treated!

This essay on friendship, I believe, was written by Emerson in honour of his dear friend, Henry David Thoreau.  Emerson’s rhapsodic sentences impact the reader right from the start, as he elevates friendship to the platform of one of the greatest gifts of life.   As soon as we’re drawn into the bonds of deep friendship, our soul is engaged and we function almost on a different plane.

“Delicious is a just and firm encounter of two, in a thought, in a feeling.  How beautiful, on their approach to this beating heart, the steps and forms of the gifted and true!  The moment we indulge our affections, the earth is metamorphosed: there is no winter, and no night: all tragedies, all ennuis vanish;  — all duties even; nothing fills the proceeding eternity but the forms all radiant of beloved persons …”

While Emerson lauds the benefits of friends, he also is cognizant of the fluctuations in friendship, but rather than lamenting over the lows, we should see them as a natural rhythm of life.

“ …. Thou art not my soul, but a picture and effigy of that.  Thou hast come to me lately, and already thou art seizing thy hat and cloak.  Is it not that the soul puts forth friends, as the tree puts forth leaves, and presently, but the germination of new buds, extrudes the old leaf?  The law of nature is alternation forevermore …..  The soul environs itself with friends, that it may enter into a grander self-acquaintance or solitude; and it goes alone, for a season, that it may exalt its conversation or society ……”

Yet while one must treasure friendships and elevate them, one must not force their progression, as it would be an assault on their natural course.

“Our friendships hurry to short and poor conclusions, because we have made them a texture of wine and dreams, instead of the trough of the human heart.”

We must be patient as friendship ripens or we may find the friendship brought to a sharp conclusion.  Let nature have free-reign, and it will not disappoint.
While society pressures us to be social, true friendship is not cultivated in numbers but in a one-on-one companionship.  The bud will not flower without the correct nurturing.

“But I find this law of one to one, peremptory of conversation, which is the practice and consummation of friendship.  Do not mix waters too much.  The best mix as ill as good and bad.  You shall have very useful and cheering discourse at several times with two several men, but let all three of you come together, and you shall not have one new and hearty word.  Two may talk and one may hear, but three cannot take part in a conversation of the most sincere and searching sort …….. Now this convention, which good sense demands, destroys the high freedom of great conversation, which requires an absolute running of two souls into one.”

Emerson rejects dissimulation and false pretences in an effort to appear prestigious or more worldly, claiming that truth and sincerity in friendship is utmost.  You may look insane with this approach, but it will win you the friendship and respect that are your greatest desires.  Go against society and show your face to your fellow man, instead of your backside!
Sorry, but I just couldn’t resist teasing Emerson a little in my review.  His language is so flowery, occasionally trite and often exaggerated that I found myself struggling sometimes to take the essay seriously.  Yet he does have some wonderful points and hits on the important qualities of friendship and its worth to mankind.
Deal Me In Challenge #6 – Two of Spades