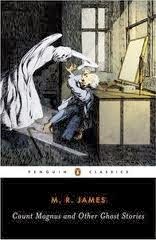 “By what means the papers out of which I have made a connected story came into my hands is the last point which the reader will learn from these pages.”  (from Count Magnus)

I first must say that horror genre isn’t really my thing, even if the book is a classic.  So, despite the fact that I decided to read at least one scary story for the month of October, I was not approaching this read with much joy or interest.  How fortunate that I decided to choose M.R. James, who has perhaps changed my opinion of ghost stories forever.

The back of my Penguin Classic, “Count Magnus and Other Ghost Stories” says:  “M.R. James, referred to by H.P. Lovecraft as ‘one of the few really creative masters in his darksome province,’ was a pioneer in the history of the English ghost story, transforming the ghost from a wispy, ethereal figure into an aggressive, malevolent, and all too palpable force of evil ……”

My favourite story in this compilation was “Casting the Runes.”  Eerie and terrifying, it gave the main character some power over the dark force and, instead of becoming a victim, he emerges as triumphant over his spectral foe.  This story was apparently the basis for a classic horror film, “Curse of the Demon” (which I’ve never seen).

I also enjoyed, “Oh, Whistle and I’ll Come to You, My Lad,” where blowing a whistle has very unexpected repercussions, “Canon Alberic’s Scrap-book,” “The Ash Tree“, which, for me, was one of the scariest in the book, “Number 13,” a creepy tale about a haunted hotel room, and “Count Magnus,” where the reader learns to be careful what you ask for. 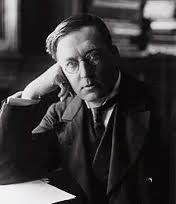 Montague Rhodes James specialized in medieval illuminated manuscripts and was the provost of both Kings College, Cambridge, and Eton College.  He is known for redefining the ghost story by “using contemporary settings and abandoning trite Gothic clichés.”  He was highly articulate, extroverted and sociable and, though he never married, was known for having a great number of treasured friendships.

His introduction to ghosts came at a young, and perhaps impressionable, age:  “What first interested me in ghosts? This I can tell you quite definitely. In my childhood I chanced to see a toy Punch and Judy set, with figures cut out in cardboard.One of these was The Ghost. It was a tall figure habited in white with an unnaturally long and narrow head, also surrounded with white, and a dismal visage.  Upon this my conceptions of a ghost were based, and for years it permeated my dreams.”

What was particularly refreshing about James’ stories was that his treatment of his subject was very subtle.  His stories were full of shadows and dark blots, old trees personified and deaths with no concrete explanation.  He gives the reader just enough for a rough outline, then leaves them to use their imagination to formulate even more terrifying surmises based on his carefully crafted descriptions. One feels that these malevolent spirits should never have been disturbed.  Brrr! 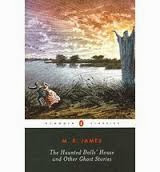 I have The Haunted Doll’s House and other Ghost Stories sitting on my bookshelf and I can’t wait to pick it up and fade into the supernatural world of James’ ghostly tales.