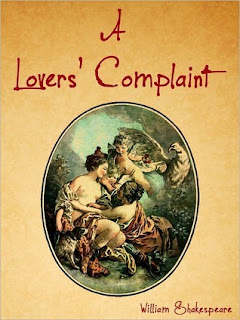 From off a hill whose concave womb re-worded
A plaintful story from a sistering vale,
My spirits t’attend this double voice accorded,
And down laid to list the sad-tuned tale;
Ere long espied a fickle maid full pale,
Tearing of papers, breaking rings a-twain,
Storming her world with sorrow’s wind and rain
This “fickle maid” relates her story, a story of love unrequited, but as she describes her inner conflict, we receive a vision of the maid, no longer young:
“Whereupon the thought might think sometime it saw
The carcass of a beauty spent and done;
Time had not scythed all that youth begun,
Nor youth all quit; but, spite of heaven’s fell rage,
Some beauty peept through lattice of sear’d age.”
Crying despondently and wiping her eyes with a handkerchief, the maid tells a respectable man, who is grazing his cattle nearby, of her troubles.
“Not age, but sorrow, over me hath power;
I might as yet have been a spreading flower,
Fresh to myself, if I had self-applied
Love to myself, and to no love beside.”
She fell in love with a young man with a silken tongue and enchanting brown curls, who stole her heart in spite of other more questionable qualities.
“His qualities were beauteous as his form,
For maiden-tongued he was, and thereof free;
Yet, if men moved him, was he such a storm
As oft twixt May and April to see,
When winds breathe sweet, unruly though they be.
His rudeness so with his authorized youth
Did livery falseness in a pride of truth.”
She “gave him all my flower,” without being demanding of him like others.  She claimed that “mine honour shielded” but she became an “amorous spoil.” Even though she knew of his other women, of his “foul beguiling” and of his illegitimate children, still she is taken in by his false charm.  Yet, in spite of this sorrow that is a burden to her heart, she claims that she would be captivated by him all over again.
O, that infected moisture of his eyes,
O, that false fire which in his cheek so glow’d,
O, that forced thunder from his heart did fly,
O, that sad breath his spongy  lungs bestow’d,
O, all that borrow’d motion seeming ow’d,
Would yet again betray the fore-betray’d,
And new pervert a reconciled maid.

Popular in medieval and renaissance times, this “complaint poem” is written in rhyme royal (ababbcc), with seven lines per stanza in iambic pentameter, which I just encountered while recently reading The Brubury Tales (in The Feet’s Prologue), a take on Chaucer’s The Canterbury Tales.  Because this style was unusual for Shakespeare, some critics question his authorship, yet there are parts of the poem that certainly echo of Shakespeare, and coincidentially the first stanza is very close to the first stanza of The Rape of Lucrece.

As for figures of speech, the following are included in the poem:  alliteration, anaphora, hyperbole, metaphor, paradox, personification and simile.  Could I identify them all on the first read?  No, but that means that I’ll have to read The Lover’s Complaint again!

Deal Me In Challenge #4

6 thoughts on “A Lover’s Complaint by William Shakespeare”