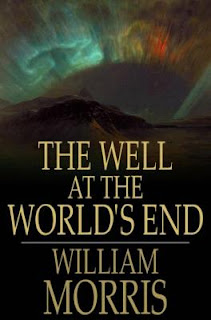 “Long ago there was a little land, over which ruled a regulus or kinglet, who was called King Peter, though his kingdom was but little.”

King Peter of Upmeads has four sons, Blaise, Hugh, Gregory and Ralph.  All resolve to set out to seek great adventures but the youngest, Ralph, decides to do so against his father’s wishes.  Encouraged by Dame Katherine, a newly married lady to the chapman, she gives him a beaded necklace of blue and green stones and inspires him to find the Well at the World’s End.

“Son, true it is that the water of that Well shall cause a man to thrive in all ways, and to live through many generations of men, maybe, in honour and good-liking; but it may not keep any man alive for ever; for so have the Gods given us the gift of death lest we weary of life ……

Of strife and of war also we know naught: nor do we desire aught which we may not easily attain to.  Therefore we live long, and we fear the Gods if we should strive to live longer, lest they should bring upon us war and sickness, and over-weening desire, and weariness of life.  …..

…. ye wear away your lives desiring that which ye may scarce get; and ye set your hearts on high things, desiring to be master of the very Gods.  Therefore ye know sickness and sorrow, and oft ye die before your time, so that ye must depart and leave undone things which ye deem ye were born to do; which to all men is grievous.  And because of all this ye desire healing and thriving, whether good come of it, or ill.  Therefore ye do but right to seek to the Well at the World’s End, that ye may the better accomplish that which behoveth you, and that ye may serve your fellows and deliver them from the thralldom of those that be strong and unwise and unkind, of whom we have heard strange tales.”

Ralph’s youth and inexperience are apparent at the beginning of the story, as he travels first to Bourton Abbas and then through the Wood Perilous, meeting up with various adventures and challenges on his journey.  He encounters two women, both of whom he loves, yet one whom he is not destined to keep.  Finally, with Ursula, his love, and with the help of the Sage of Sweveham, they manage to attain their quest, finding the Well and drinking of its bounty.  Their return home is also fraught with danger and intrigue, as Ralph learns the value of perseverance and the rewards of loyalty.

Born in Essex, William Morris had a number of accomplishments and careers during his life, including that of a textile designer, a poet, a novelist and a social activist.  Though classically trained at Oxford, Morris became an architect, and with his friends, the well-known artists Edward Burne-Jones, Dante Gabriel Rossetti, and archtitect Philip Webb, they formed a decorative arts firm that became the rage of the Victoria era.  His renown as a poet followed, and he further exercised his literary talents as a novelist.    His interest in Marxism and concern for social issues developed an appetite for activism which lasted throughout his life.  He died in 1896 of tuberculosis at the age of 62.

The Well at the World’s End is a very curious mix of fairy tale, adventure, and rather risque scenes and actions for the time period of Victorian England.  While it reminded me very much of Le Morte d’Arthur, The Faerie Queene, and Sir Gawain and the Green Knight, Morris was not reluctant to reveal the physical attraction between Ralph and the women he encountered, nor did he prevaricate about their physical relationship, however, he did so in rather a romantic knightly way.  Morris was a muse for writers like C.S. Lewis and J.R.R. Tolkien who admired his pioneering work in the genre of fantasy fiction, and the names “Gandolf” and “Silverfax” which appear in The Well at the World’s End, are echoed also in The Lord of the Rings.

This book was a wonderfully rich and exciting read, full of heroic exploits, peril and satisfying resolutions.  Morris was indeed a talented writer and his love for the Medieval is apparent in every word of the story.  I own his book, The News From Nowhere, which I hope to read soon as a follow-up.  Being compared to Gulliver’s Travels and Erewhon, it’s a complete deviation from this story —an utopian novel of a libertarian socialist bent. In any case, his story telling abilities solidified themselves for me with this novel and I’m looking forward to exploring more works from Morris.