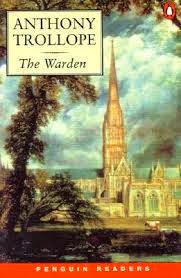 “The Revd Septimus Harding was, a few years since, a beneficed clergyman residing in the cathedral town of ______, let us call it Barchester.”

In many a town in England there are given charitable bequests to church dioceses, and the honest public assumes that the monies are distributed in a fair and equitable way, in a manner that benefits all who have need of them.  Yet this learned reporter has discovered that in a small holding in Barsetshire, there has been a shocking exploitation of this practice, resulting in twelve respectable old gentlemen being cheated out of their livelihood.  And who is the avaricious fiend to be so bold as to expropriate funds which are not solely meant for him?

The Revd Septimus Harding, the warden of Hiram’s Hospital in Barsetshire, it has been discovered, earns 800 pounds per annum for his position as warden and overseer of the legacy left by the philanthropic John Hiram, namesake of Hiram’s Hospital, yet the gentlemen who were meant to benefit from his legacy, receive housing and a paltry one shilling four pence per day to meet all their needs in their tender and uncertain later years of life.

Ask yourself, can you as a common man remain indifferent to the plight of others?   Can you remain indifferent to the misappropriation of funds by a man who not only takes bread out of the mouths of his brothers, but whose actions leaves a stain on the offices of the sacred and respected agents of mother Church?  Oh, for shame you vainglorious men who have no respect for what is sacred, yet greedily engorge yourselves with money to line your already comfortable existence!  Is it to be borne?  No!  Mr. Harding must be revealed as the avaricious culprit he is, and the money given to the rightful recipients, who deserve it far more than a warden who presently lives comfortably on this legacy while doing nothing to earn its bestowal.  Who will see that justice is served in such a uncomfortable yet critical situation?  This reporter knows just the man!

Our young and zealous reformer, Mr. John Bold, has been working industriously to illuminate this unfortunate circumstance and expose the corruption that has so carefully been concealed .  Can we trust this gentleman in his noble purpose?  Certainly!  Not only does his estimable reputation speak volumes, but in spite of his relationship to the aforementioned’s lovely daughter, Eleanor, he will not let possible future familial ties stand in the way of serving justice.  We have learned that he has wisely consulted a respectable and reputable law firm to deal with this perplexing and delicate matter and that, once begun, nothing will stand in his way.  The bishop and his pretentious son, the archdeacon Theophilus Grantly (also son-in-law to the accused), can puff and blow all they like, but we all know which side is valiantly trumpeting the truth.  It will be heard, and the Reverend Harding will be made to choke on it.

This is a sample of what poor Septimus Harding, warden of Hiram’s Hospital had to withstand: an unfair accusation, judgement, an attack on his character and the possible loss of his livelihood.  His son-in-law, the archdeacon, attempts to defend his father-in-law, yet in a worldly, materialistic, dictatorial manner, which his father-in-law cannot respect or accept.  Harding’s simple, gentle, sacrificial nature, while at first bends under the pressure of his contemporaries, eventually asserts itself in his determination to act in an honourable manner.  In a case where people’s good intentions do more harm than good, we realize that law and justice followed blindly, can have unexpected negative repercussions.  Love and friendship hold a human value that money can never equal, and the loss of the former can create an emotional deprivation that is felt long after the incident is over.

Behold the Stars:  “I love it, though – it’s a gentle novel, with real, ‘whole’ characters (George Orwell described it as one of his best works), and Septimus Harding is one of my favourite characters of all time.”

Avid Reader’s Musings:  “Bold sees his purpose as noble and right even though he’s hurting the people he loves.  It makes the reader question his decision, is it truly motivated by his beliefs or by his pride?”

Fig and Thistle:  “Each character is vividly unique and the dialogue is engaging.  This book certainly has a heavy dose of wit and shrewd society skewering, but without cynicism.”

This first book in the Barsetshire Chronicles read-along, hosted by Avid Reader’s Musings and Fig & Thistle, proved to be an excellent introduction to Anthony Trollope and I have already cracked open the next book, Barchester Towers, to continue my visits with the characters and happenings of Barsetshire. 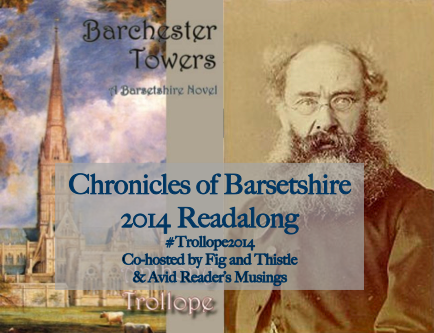 11 thoughts on “The Warden by Anthony Trollope”