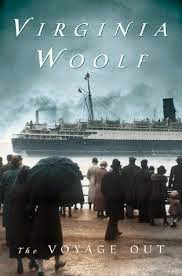 “As the streets that lead from the Strand to the Embankment are very narrow, it is better not to walk down them arm-in-arm.”

O at Behold the Stars is a Virginia Woolf aficionado and when she suggested a read-along of Woolf’s, The Voyage Out, I was immediately on board (excuse the pun!).  I’d loved To The Lighthouse, but Mrs. Dalloway had left me in a rather uncertain and confused stupor, while Orlando somehow didn’t resonate with me at all, so I wondered how I would react to this novel.  It could have gone either way.

“The voyage had begun, and had begun happily with a soft blue sky, and a calm sea.  The sense of untapped resources, things to say as yet unsaid, made the hours significant, so that in future years the entire journey perhaps would be represented by this one scene, with the sound of sirens hooting in the river the night before, somehow mixing in.”

In The Voyage Out, we meet a myriad of characters, but the main focus is on Rachel Vinrace, a young sheltered English girl who departs on a voyage with her uncle and aunt to South America.  The only accomplishment in life that she has mastered is playing the piano, which she does with artistic efficiency.  During the voyage and at their destination she encounters a number of characters, from Mr. and Mrs. Dalloway (do they sound familiar?  Yes, these are the characters from Woolf’s later novel, Mrs. Dalloway) on the ship, to Hirst and Hewet, two young men who capture her interest and stimulate her introspection, as well as various other male and female characters.  Through this cast Woolf conducts an examination, from the microscopic world of human nature, giving the reader an insightful tapestry of the faults and dreams of the various personalities, to the macroscopic world of Edwardian England with all its characteristics of pleasure, luxury and hope. Just as the era brought a change in social structure, we can see changes in Rachel, as she is rather abruptly pulled from her sheltered, unadventurous world and introduced into active society and more pointedly, the admiration of men.  Still, the alterations in Rachel’s character from her experiences, happen in a rather muted and introspective manner and one must wonder at the end, if any true changes occurred at all.

The sense of isolation seeps and oozes out of the pages of the novel and its characters appear immersed in it, as if in a fog.  The voyage itself isolates the characters from the society with which they are familiar, the country they visit being new and exotic, yet the book also indicates an emotional detachment from each other and even oneself.

“…… To feel anything strongly was to create an abyss between oneself and others who feel strongly perhaps but differently ….”

“….. What solitary icebergs we are, Miss Vinrace!  How little we can communicate! ….”

“….. A feeling of emptiness and melancholy came over them; they knew in their hearts that it was over, and that they had parted forever, and the knowledge filled them with far greater depression than the length of their acquaintance seemed to justify.  Even as the boat pulled away they could feel other sights and sounds beginning to take the place of the Dalloways, and the feeling was so unpleasant that they tried to resists it.  For so, too, would they be forgotten ….”

” …… She became a ship passing in the night — an emblem of the loneliness of human life, an occasion for queer confidences and sudden appeals for sympathy…..”

“Although they had talked so freely they were all uncomfortably conscious that they really knew nothing about each other.”

A sense of beginnings and endings also permeate the pages, and while Woolf’s delightful prose and descriptions can bring a lightness to the situations, there is an uncomfortable sense of the unknown that hovers just outside of our sight.  It is life, life in an essence that Woolf is a master at capturing.

The word that jumps out at me when I think of this novel is capricious.  Woolf stream-of-consciousness style of writing allow ideas and images to float in and out of the narrative, weaving a tapestry of a story, and like a tapestry, the picture is not always crystal clear.  As the character of Rachel does not settle comfortably into her society and her surroundings, neither does this novel sit comfortably with a recognizable label or description.  It exemplifies the Woolf I’m beginning to know, and while I’m not yet at ease with her writing, I can certainly say that I’m getting used to it and am developing an enthusiastic appreciation. 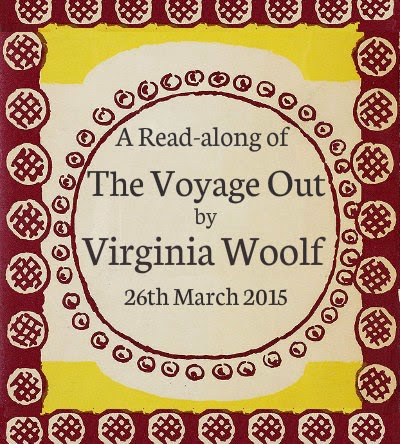 21 thoughts on “The Voyage Out by Virginia Woolf”