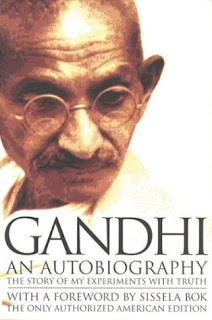 “The Gandhis belong to the Bania caste and seem to have been originally grocers.”

Encouraged by friends and colleagues to share the history of his movement, Gandhi began his autobiography as weekly installments which were published in his journal, Navjivan, and also, Young India.  Writing in jail, Gandhi wanted to communicate spiritual and moral truth that he has discovered through personal experiments and he shares the impetus for his search:

“But one thing took deep root in me — the conviction that morality is the basis of things, and that truth is the substance of all morality.  Truth became my sole objective.  It began to grow in magnitude every day, and my definition of it also has been ever widening.”

As many other biographers have done, Gandhi begins his narrative with his childhood, sharing his many childish misdemeanors such as smoking, drinking, stealing, etc.  Married at the age of thirteen, Gandhi condemns this practice, characterizing his desire for his wife as lust, feeling in bondage to his passions, which he laters frees himself from:

” …… (I) realized that the wife is not the husband’s bondslave, but his companion and helpmate, and an equal partner in all his joys and sorrows —- as free as the husband to choose her own path ….”

As a young man, Gandhi travelled to England to study to become a lawyer.  Upon returning to India, and being bored with his opportunities, he accepted the position of legal advisor on a large law suit in South Africa. With regard to his vocation, Gandhi had sharp insights, and with a moral bent, turned a perhaps mistrusted profession into a respected appointment:

“I realized that the true function of a lawyer was to unite parties riven asunder.  The lesson was so indelibly burnt into me that a large part of my time during the twenty years of my practice as a lawyer was occupied in bringing about private compromises of hundreds of cases.  I lost nothing thereby — not even money, certainly not my soul.”

“The symbol of a Court of justice is a pair of scales held evenly by an impartial and blind but sagacious woman.  Fate has purposely made her blind, in order that she may not judge a person from his exterior but from his intrinsic worth.”

In spite of being an unimposing figure, Gandhi’s greatness came not only from his desire for unity among people and serving the poor, but also his unique ability to see situations from a different perspective.  What the world would see as a weakness, Gandhi often saw as a strength:

“I must say that, beyond occasionally exposing me to laughter, my constitutional shyness has been no disadvantage whatever. In fact, I can see that, on the contrary, it has been all to my advantage.  My hesitancy in speech, which was once an annoyance, is now a pleasure.  Its greatest truth has been that it has taught me the economy of words.  I have naturally formed the habit of restraining my thoughts ……. Experience has taught me that silence is part of the spiritual discipline of a votary of truth ……..  My shyness has been in reality my shield and buckler.  It has allowed me to grow.  It has helped me in my discernment of truth.”

“Yet even differences prove helpful, where there is tolerance, charity and truth.”

His work in South Africa spanned decades, as he fought for the rights of the Indians there, after encountering race prejudice himself.  Many of his political views became entrenched with his South African experiences, and his religious views grew as well.  He became known for the employment of satyagraha, or non-violent protest and elucidates how it played out in his life.  The reader follows Gandhi through the Boer War and into World War I and his return to life in India.  He began to see the detriment of British colonial rule and worked hard to make his country ready for the independence that he foresaw.

His humility and his concern for his fellow-man resonate from the pages, his wisdom bringing unique insight.

“Man and his deed are two distinct things.  Whereas a good deed should call forth approbation and a wicked deed disapprobation, the doer of the deed, whether good or wicked always deserves respect or pity as the case may be.  ‘Hate the sin and not the sinner’ is a precept which, though easy enough to understand, is rarely practised, and that is why the poison of hatred spreads in the world …………. It is quite proper to resist and attack a system, but to resist and attack its author is tantamount to resisting and attacking oneself.  For we are all tarred with the same brush, and are children of one and the same Creator, and as such the divine powers within us are infinite.  To slight a single human being is to slight those divine powers, and thus to harm not only that being but with him the whole world.”

His desire for truth through the restoration of broken relationships and systems resonated throughout his work and his life.

What really spoke to me in this biography is that Gandhi, in spite of claiming a natural affinity with all races, also worked hard to develop traits within himself that would foster unity, empathy, patience and love towards others.  While it was a conviction within himself to cultivate positive behaviour, it was done with great effort and sometimes at a cost.  It is a tragic irony that Gandhi’s life came to and end with an act of violence, but perhaps the man himself would turn that perception on its head and simply say that it was further evidence of our need of the very thing which, at times, seems out of reach.  Yet as long as we are striving for peace, it is perhaps the striving that truly matters.

“I have found by experience that man makes his plans to be often upset by God, but, at the same time where the ultimate goal is the search of truth, no matter how a man’s plans are frustrated, the issue is never injurious and often better than anticipated.”

10 thoughts on “The Story of My Experiments With Truth by Mohandas K. Gandhi”