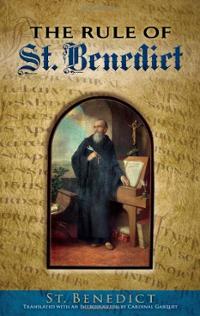 “Listen carefully, my son, to the master’s instructions, and attend to them with the ear of your heart.”

Benedict of Nursia lived in Italy during the collapse of the Roman Empire and during his life, the empire was in constant battle with barbarian tribes.  Leaving his home in Nursia, in the region of Umbria during the reign of the barbarian king, Theodoric, Benedict arrived in Rome to attend school but, disgusted with the paganism and dissolution that he witnessed, he eschewed worldly cares, taking residence in a cave at Subiaco, thirty miles east of Rome.

During three years in his cave, Benedict became admired for his spiritual devotion, and when an abbot in a nearby monastery passed away, Benedict was convinced, against his inclination, to take his place.  But twice, monks envious of Benedict attempted to poison him, from which he was saved by miracles.  He eventually took some disciples and founded a monastery on the mountain above Cassino, located eighty miles south of Rome.  As his fame spread, even the great king of the Goths, Totila, sought out an audience with him.

Benedict called his Rule, “a little book for beginners,” and he covers such disciplines as obedience, humility, contemplation and living in community.  Yet he first introduces us to four types of monks, the cenobites (belonging to a monastery and serving under an abbot), the anchorites or hermits (having lived in a monastery for a long time and their zeal for the monastic life has cooled), the sarabites (detestable monks who have “a character as soft as lead”, and are captured by worldly delights, a law unto themselves), and gyrovagues (drifters who are captives to their own selfish desires).  His rule is to assist the first class of monks.

The Rules of Humility

There were a number of interesting revelations in the rule, which I found rather interesting.  Benedict states that the Lord usually reveals what is best to the younger monks, yet still the abbot has the final decision.  This is a fascinating merging of both older and younger wisdom in a hierarchical framework which is designed to work best for all parties.

While Benedict’s rule is, in many ways, strict, I was actually surprised at the flexibility within it.  There is grace for those who stumble and understanding of human weaknesses, as is evidenced by the description of abbots and their moral duties:

“……. He must hate faults but love the brothers.  When he must punish them, he should use prudence and avoid extremes; otherwise, by rubbing too hard to remove the rust, he may break the vessel.  He is to distrust his own frailty and remember not to crush the bruised reed.  By this we do not mean that he should allow faults to flourish, but rather, as we have already said, he should prune them away with prudence and love as he sees best for each individual. Let him strive to be loved rather than feared.”

Apparently prior to Benedict’s rule, the theological view was that each person was struggling towards God, and spiritual direction had a very personal aspect to it.  Benedict’s rule signified a turning point in perception, eventually making the process more regimented than personal.  The Rule has further reaching implications as well, being the forerunner to the rule of law and written constitutions, assisting in the shaping of medieval ideas.

Benedict’s abbey at Monte Cassino was severely damaged by Allied bombing during World War II, having to be rebuilt afterwards.  A bit of trivia:  author Walter J. Miller was part of the bombing raids on Monte Cassino and was severely affected by them.  His dystopian book A Canticle for Leibowitz has echoes of both the monastery and his struggles to come to terms with his part in its destruction.  It’s a great book, if anyone is looking for a recommendation.

14 thoughts on “The Rule of Saint Benedict”