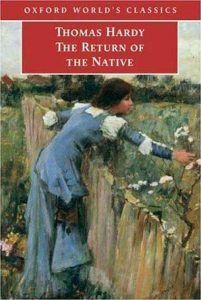 The Return of the Native: “A Saturday afternoon in November was approaching the time of twilight, and the vast tract of unenclosed wild known as Egdon Heath embrowned itself moment by moment.”

Oh my, I was laughing after finishing this novel, which perhaps wasn’t the reaction that Hardy had envisioned.  But the drama!  The high drama!  I was beginning to wonder what other circumstance of fate (which actually didn’t seem like fate but a deliberate thwarting of anyone’s happiness) was going to occur to cause yet another catastrophe.  It was a medley of characters making the same mistakes over and over again and never learning one thing from them.

Yet, on a positive note, it is the first Hardy novel that I’ve enjoyed and while there is drama and trauma and tragedy, there are a few characters one can respect and more than a few who behave like regular human beings.  However, there are many who don’t, as well, and of course being Hardy, those characters populate the main story. 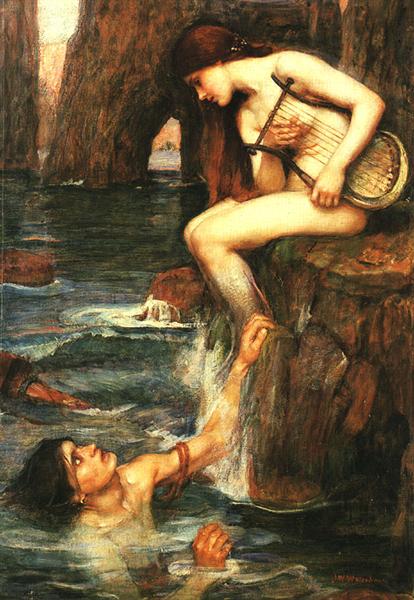 Thomasin Yeobright married Damon Wildeve, a tradesman of Egdon Heath …. but wait!  Thomasin did NOT marry Wildeve, as she was carried off by Diggory Venn in her flight from an embarrassing misunderstanding on her wedding day and there is a possible scandal if the union is not completed.  But Wildeve cannot extricate Eustacia Vye from his thoughts, a beautiful woman of the Heath and his former paramour, who is as removed from the world and reality as she is selfish.  But then Clym Yeobright, cousin of Thomasin and son of Mrs. Yeobright, returns from his grand employment in Paris, a bright star of the future in the eyes of many, including Eustacia who views him as the vehicle for her escape from the Heath, a place and lifestyle she despises, to the glittering glamour of a cosmopolitan city, her life dream.  The return of the native is rejoiced by all, until Clym decides his native Egdon is loved more dearly than any meaningless city job and his decision to stay in Egdon Heath percipitates a chain of events that echo a falling of dominos from which few can escape the ensuing calamities.

This is one of the so called Rainbarrows above Duddle Heath, one of the heaths close to Hardy’s birthplace that became Egdon Heath in the novel. The Rainbarrow has a superb view over the valley of the Frome and this is where Eustacia Vye watched and looked for Wildeve ~ source Wikimedia Commons

As for the title of the novel, it is a curious conundrum, in that it can initially appear that the story will revolve around Clym.  However Clym as a character turns out to be less important than his RETURN which is the catalyst for the chain of catastrophes that follow.  This novel certainly plays like a Greek tragedy with characters making decisions that are nearly always fatal to their happiness and often endanger others.

And one cannot leave the novel without considering the character of Eustacia Vye.  Is she a witch, a seductress, a sociopath or simply a flawed and broken human being?  A hedonist she is certainly, as she seeks people and situations that will bring her the things she desires.  However, Hardy made her more complex than that, in a way that I find somewhat inconsistent.  Initially, her behaviour is completely self-centred with no regard for anyone but her own needs, moving from man to man based on their ability to raise her station in life and therefore, she assumes, securing her happiness.  However, she refuses to acknowledge the hints that Clym has no intention of returning to Paris, and when they marry, despite her dismay at his decision, there is a care of him and an odd type of bond, that seem to contradict her original character.  Complex, yes, but believable ……  I wonder …… 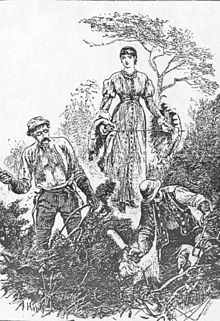 “Unconscious of her presence, he still went on singing.” Eustacia watches Clym cut furze in this illustration by Arthur Hopkins for the original Belgravia edition (Plate 8, July 1878). ~ source Wikipedia

I must say that this is the first Hardy novel that I’ve mildly enjoyed, my experiences with Far from the Madding Crowd and Under the Greenwood Tree certainly not endearing me to his tone and overly dramatized plot construction.  Yet, I will persevere as there is a sort of inexplicable appeal for his work that sometimes defies common sense.  While I’m not hooked, I’m certainly interested.

If anyone has read any other Hardy novels that they could recommend, I’d be grateful for any guidance you could give!

34 thoughts on “The Return of the Native by Thomas Hardy”