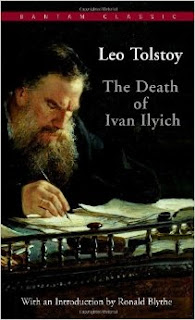 “Inside the great building of the Law Courts, during the interval in the hearing of the Melvinsky case, the members of the judicial council and the public prosecutor were gathered together in the private room of Ivan Yegorovitch Shebek, and the conversation turned upon the celebrated Krasovsky case.”

Wow!  My last Tolstoy novel read was War and Peace over two years ago and I’d forgotten the depth that Tolstoy could create within his stories with a clear, straight-forward narrative.  The Death of Ivan Ilyich appears to be merely a tale of the last days of a Russian court judge, yet Tolstoy brings the human condition into vivid and startling colours.

Ivan Ilyich has a typical Russian childhood, becomes a respected and accomplished young adult who manages to climb the social strata with aplomb and an admirable acuity.  He takes a wife who, though a nag, through his very avoidance of her, manages to give him a sharper focus to his work, and therefore her very shrewishness assists him in his social ascension.  They have the average and respectable number of two children, a girl and a boy, along with the typical infant deaths of that period, and Ilyich’s life is complete.  Except for one problem.  He is dying.

With Tolstoy’s astute and penetrating acumen, the reader shares Ivan Ilyich’s last days as he slowly sinks into the realization of his approaching demise.  In life, Ilyich was able to focus on the impermanent: his career, the appearance of a normal family life, his status in the community.  All his worth was embodied in these transient things, but suddenly in illness, these symbols fade into obscurity and death forces him, almost against his will, to view his life in stark reality.

Initially, Ivan is confused, and cries out to a God whom he had previously seen only as a inconvenient afterthought:

“Why has Thou done all this?  What brought me to this?  Why, why torture me so horribly?”

Yet slowly a “strange idea” begins to form in his mind.  He does not want to suffer, yet live.  But how does he wish to live?

“As you used to live before — happily and pleasantly?” queried the voice.  And he began going over in his imagination the best moments of his pleasant life.  But strange to say, all these best moments of his pleasant life seemed now not at all what they had seemed then.  All — except the first memories of his childhood …..  As soon as he reached the beginning of what had resulted in him as he was now, Ivan Ilyitch, all that had seemed joys to him then now melted away before his eyes and were transformed into something trivial, and often disgusting ……..  And the further he went from childhood, the nearer to the actual present, the more worthless and uncertain were the joys …..

“…. as though I had been going steadily downhill, imagining that I was going uphill.  So it was in fact.  In public opinion I was going uphill and steadily as I got up it life was ebbing away from me …..  Can it be I have not lived as one ought?”

Death brings echoes of truth to him, but instead of accepting this burgeoning enlightenment, Ivan chooses to hang on to the mirage of the life he has lived and dismisses the idea.  The reader wonders if Ivan will die as he’d lived, merely existing, and if the true meaning of life itself will elude his grasp?

In spite of the title, much of the story is about Ivan’s life and through his life, we view his death.  With each sentence Tolstoy drives home the futility and meaninglessness of Ilyich’s daily actions, that brought material success but failed to feed the soul within the man.  It is only at the very end, with the touch of his son’s hand and a kiss, that Ivan experiences an epiphany that expands his whole world.

The universality of the story echoes with a profound yet practical resonance.  Drawing from the narrative, Ivan’s life, though complete with success in business, a (on the surface) contented family life, and respect of his peers, it is really bereft of human relationship in all areas.  Tolstoy himself says Ivan’s previous life “was the simplest, the most ordinary, and the most awful.”   Ivan could be you or I and with his novella, Tolstoy prods us to examine the purpose of our existence.  We need to evaluate our lives ….. not only just skate on the surface, but to dig deeply.  What is truly important in life? What genuinely gives us life as soulful beings and not simply as materialistic creatures who live only for pleasure and business?  And a question that has been on my mind often lately:  How do we struggle against societal pressure to conform to the latter and find a meaningful existence, to live in the “now” yet reach beyond it?

0 thoughts on “The Death of Ivan Ilyich by Leo Tolstoy”