This Second Nun jumps right into her tale, cautioning her listeners to beware of Idleness.  Reason teaches us to shun this pastime, as it makes us numb to the world and causes ruin. 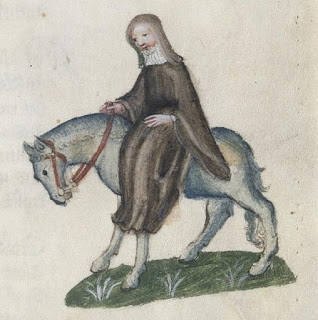 Next, she gives the Invocacio ad Mariam, in which she invokes Mary as her Muse, praising her attributes and asking for her assistance.  Faith without works is dead, and Mary must help her to tell her tale.

An Interpretatio Nominis Ceciliae follows, where the origin and meaning of Cecilia’s name is described in detail.  In effect, it means “Lily of Heaven,” the white signifying her virginity and pureness.

Cecilia was a Roman noblewoman, who prayed to God without ceasing.  In spite of her desire to remain a virgin, she is married to Valerian. Concerning their physical relationship to come, she continues to pray for purity for her body and soul.  To Valerian she relates that she has a guardian angel who will strike him dead if he touches her with love or lust, but, if he loves her “cleanly,” the angel will show him glory. He asks for visual proof of this angel, and Cecilia professes that he must believe and be baptized and then follow the Appian Way until he comes to a village.  There he will meet Pope Urban, and if he confesses, he will see the angel.  All happens as his wife says it will, and when he returns home, he finds Cecilia with the angel who announces that he will grant him one request. Valerian wants his brother, Tiburce, to be baptized as well.  His wish is granted.

Yet the two brothers are brought before the Roman authorities.  If they refuse to sacrifice to Jupiter, their heads will be struck from their bodies. Seized by a clerk, Maximus, Valerian and Tiburce manage to garner the sympathy of the clerk and the executioners, and lead them to a faith in God.  Nevertheless the Roman prefect, Almachius, knows of their refusal and beheads them and Maximus, claiming that he saw their souls soar to Heaven.  The poor clerk is beaten to death with ropes of lead.  Cecilia buries the three of them together.

Almachius, hearing of Cecilia’s deeds, has her brought to him, whereupon she denounces him and his stone gods in words most unflattering, stoking Almachius’ ire.  He orders her to be boiled in a flaming bath, but Cecilia manages to sit in it for a night and a day without it doing any damage to her whatsoever.  Determined to bring about her death, Almachius sends an executioner to chop off her head. One, two, three blows are delivered by the executioner but he is unable to separate her head from her body and she lives three more days with a partially severed head, tormented but preaching and converting people.  She finds Saint Urban, bestows upon him her goods, and instructs that her house be used as a church, before she is born away to heaven, and Urban buries her body.

These tales of virgin saints must have been reasonably familiar during Chaucer’s times, yet I’m not sure if I’ve ever heard of a married virgin saint. This tale perhaps fits with The Wife of Bath, in that in the Wife’s tale, she controls her husband with sex, power and deceit, whereas in this tale Cecilia influences her husband spiritually, with her goodness and grace.  Of course, perhaps I’m the only one who has conceived of such an interesting parallel …… I’m not sure.

Ooo, I’m getting near the end of this project.  I’m a little behind, and O, my reading partner, has already finished and compiled a fabulous final post.  But I’ll just plug away until I reach the finish line.  I already feel that I’m going to miss all these vibrant and engaging characters!