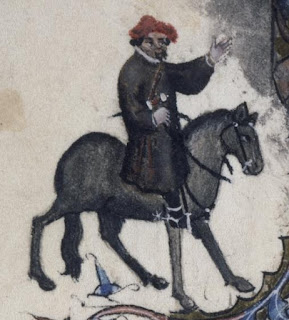 A merchant of St. Denys in northern France, lives with his wife in comparative luxury.  Sir John, a young monk with a pleasing face, often visits the couple, and he is as close as a brother, since he and the merchant grew up in the same village.  One day, on a visit, the merchant’s wife confesses to the monk that her sex-life with her husband is non-existant, her marriage is unhappy and her husband is miserly.  She is in need of 100 francs, on loan, to buy herself the pretty things which her husband denies her.  Sir John confesses his love for her and agrees to the loan, for which she pays him by sleeping with him after her husband leaves on a business trip.  The merchant’s trip is successful, yet he must borrow money to replenish his stores.  He goes to Paris for the loan and while there, visits Sir John who had borrowed money from him prior to his trip, but the monk claims that he repaid the loan to the merchant’s wife. Annoyed, the merchant confronts her when he arrives home.  Cursing Sir John, she claims that she thought the money was for her and had spent it on clothing.  She offers to repay him with sexual favours.  The merchant, deciding it is fruitless to deride her, forgives her.

This tale, set in France, apparently has many French phrases in it, adding a touch of local colour and prompting scholars to speculate whether the tale was an early Chaucer and closer to the French fabliaux stories of the time.

There is definitely a parallel between money and sex in this tale.  Without access to money, the wife uses sexual favours as payment, but interestingly, she also uses sex to placate her husband, which makes it appear that sex is certainly the more flexible of the two forms of payment.  And just as the husband takes advantage of his business transactions, so does his wife take advantage of the situation to serve her purposes.  So then the question is, who has the most power in the tale ….. does the wife have all the power and the rich merchant only all the appearance of it?

7 thoughts on “The Canterbury Tales ~~ The Shipman’s Tale”