The Pardoner begins by explaining his profession, using a rather conceited tone as he exults over all the people he’s managed to deceive into purchasing his pardons for their sins.  His theme is “Radix malorum est cupidas”, which means “Greed is the root of all evils” from 1 Timothy 6:10, yet he only applies this adage if it is to his own monetary gain.  He is willing to steal from a poor woman’s children and have them starve, yet he claims that, in spite of his monstrous character, he is able to tell a moral tale.  Given that his life is constructed from an abundance of lies, one would tend not to believe him. 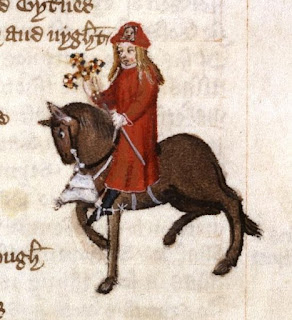 In Flanders, lived three young men who were fond of carousing, drinking and gambling.  Discovering that their friend and thousands of others have been killed by a foul fiend known as “Death,” they set out bent on revenge.  An old man who had asked Death to take him, but with no luck, says that they can find him at the base of an old oak tree, but the only thing that they discover there is a pile of gold florins.  Immediately forgetting their quest, they draw straws to see who will fetch food and drink, as they plan to wait by the tree until night so they can carry the treasure away in secrecy.  The youngest of the three is chosen to go into town and while he is away, the others plot his murder, planning to stab him with their daggers upon his return.  The youngest, on his way to town, is thinking of how to dispose of his comrades, and places poison in two of the three bottles with which he returns.  The two slay the young man and then sit down to drink their fare.  Death takes them in terrible suffering and everyone receives his due.

The Pardoner attempts to sell his relics to the Host who reacts by venting his spleen upon the Pardoner.

“I wish I had your ballocks in my hand
Instead of relics in a reliquarium;
Have them cut off and I will help to carry ’em.
We’ll have them shrined for you in a hog’s turd.”

I wolde I hadde thy coillons in myn hond
In stide of relikes or of seintuarie.
Lat kutte hem of, I wol thee helpe hem carie;
They shul be shryned in an hogges toord!
The Pardoner is incensed and the Knight attempts to mediate between them before they all continue on their way.

In the tale, the men practice self-deception, neither suspecting the others, and the Pardoner himself practices a sort of self-deception, in that he confesses his sins without expectation of any consequences resulting from them.  The tale and prologue meld very well together in that we learn that such unconscionable evil is blind to the consequence of its actions and that it can occur both in the dregs of society and even a holy man of God.