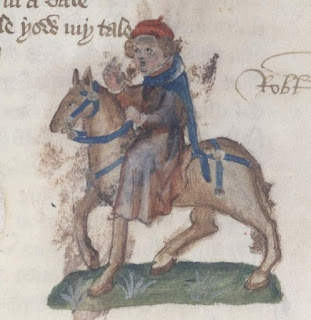 (Note:  The Word of the Knight to the Host at the end of The Monk’s Tale in my edition [the Penguin Classics edition] in other editions is counted as the Prologue to this tale, the Nun’s Priest’s Tale.)

An old widowed woman lived very meagerly with her three daughters, three sows, three cows, a sheep called Molly and a very fancy, and elegant rooster, Chanticleer.  This burnished cock lived with his lady, Lady Pertelote, and their song was a delight to the ear.  Yet one dawn, Chanticleer had an horrific nightmare, a prophecy of sorts, in that a red beast was hunting him, intending his death.  Upon hearing about the dream, Pertelote disparaged Chanticleer, calling into question his roosterly-fortitude.  How could she love such a lily-livered scaredy-cat?  Everyone knew that dreams were not to be depended on, including the wise Cato.  The nightmare must have come from vapours and her husband need only take a laxative to purge himself of them. Chanticleer countermanded her argument by providing several examples of dreams which came to fruition.

Then one May day, Chanticleer with his seven wives, was busy praising the sun, but Fate had a surprise in store for him.  A wily fox had managed to find his way into the barnyard.  Upon spotting the sly predator, the rooster felt as if he should flee, but the fox worked his wiles, praising the majestic voice of Chanticleer with honeyed words of deceit.  His ego inflated past sense, Chanticleer did not notice the fox move, and he was soon in his jaws as the fox leapt away with him.  Alerted by the noise, the whole household saw the fox with his prey and engaged in pursuit, but all looked bleak for our rooster until a clever thought came into his head.  He convinced the fox to yell insults at his pursuers and gloat upon his victory, whereupon when the fox opened his mouth to do so, Chanticleer escaped his clutches by flying up to the tree-tops.  The fox tried to convince him to come down again and they jeered at each other, but Chanticleer wisely stayed put.

“St. Paul himself, a saint of great discerning
Says that all things are written for our learning;
So take the grain and let the chaff be still.
And, gracious Father, if it be thy will
As saith my Saviour, make us all good men,
and brings us to his heavenly bliss.
Amen.”

For Seint Paul seith that al that writen is,
To oure doctrine it is ywrite, ywis;
Taketh the fruyt, and lat the chaf be stille.
Now, goode God, if that it be thy wille,
As seith my lord, so make us alle goode men,
And brynge us to his heighe blisse! Amen.

The Host commends the Priest for his merry tale and likens him to a grand cock with many pretty hens if only he’d been secular, pointing out his many manly features.  He then turns to the next pilgrim, although we are not told who it is.

Scholars are not quite certain whether to interpret this tale as a parody or an allegory, once again highlighting Chaucer’s merry aptitude for confusion.  Is it supposed to be funny or serious or both, and why can no one tell which?  It’s also the only one of the tales to allude to a 14th century event, the Peasants’ Rebellion of 1381, when it refers to Jack Straw, it’s notorious leader.