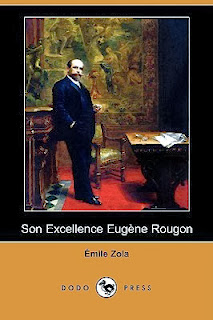 “For a moment the President remained standing amidst the slight commotion which his entrance had caused.”

I had met Eugène Rougon in Zola’s first book of the Rougon-Macquart series, The Fortune of the Rougons.  The oldest son of  Pierre and Felicité Rougon, he had been stationed in Paris, working for the cause of Louis-Napoléon Buonaparte as Emperor Napoleon III.  In Son Excellence, Eugène Rougon, we encounter Rougon as a man in disgrace, a man who has offended the Emperor and who has decided to resign before he is formally removed from office.  As he packs up his documents, a myriad of characters flow in and out of his office, almost in the formation of a dance, and each individual is as colourful as the next.  Yet as the respective characters speak their piece, the dance turns into a circling of sharks, as they all wonder how their position will be affected by Rougon’s fall and how much he can still impact their various personal causes.

The book chronicles the political scene in Paris during the government of the Second Empire under Emperor Napoleon III.  Through Rougon, we see the political machinery grinding through the career of a politician; his fall from favour, his subsequent rise through the help of his sycophantic supporters, their fickle desertion, and so forth.  Behind the glamorous facade of the Second Empire, manipulation, betrayal, coercion, conspiracy and fraud seep from between its seams, and only the clever and opportunistic will survive.

Chameleon-like Rougon is a man who knows how to bend with the force of political volatility.  Initially, after giving his resignation, he is slow, methodical and patient, rather like a toad waiting in the mud for an insect to come buzzing around his head.  Yet when he regains his title as minister, he comes alive; robust, loud, and outspoken, he soaks in the approbation of those around him while ruling with a heart of iron.  Yet Zola does a marvellous job of retaining his provincial nature; his sometimes wild, untamed speeches and stubborn and shortsighted actions reveal a man who has not been able to completely shake off the country dust of his origins.

Zola’s prose is so exquisitely compact, yet with it he constructs such a wide scope for the reader.  I felt I was really present during the baptismal procession for the Imperial Prince; I sensed the barely suppressed excitement in the air, the feel of the crowds and people pressing against me, the impatience, the festivity.  Zola doesn’t just allow us to view the Second Empire with words; he takes us right into its grandeur, its character and the various intricacies that gnaw at its foundations.

This novel is not amongst Zola’s most popular books of the Rougon-Macquart series, but I really, really enjoyed it for its dynamic appeal and attention to detail.  Can Zola write a poor novel?  Somehow I don’t think so.

(translation by Ernest A. Vizetelly)