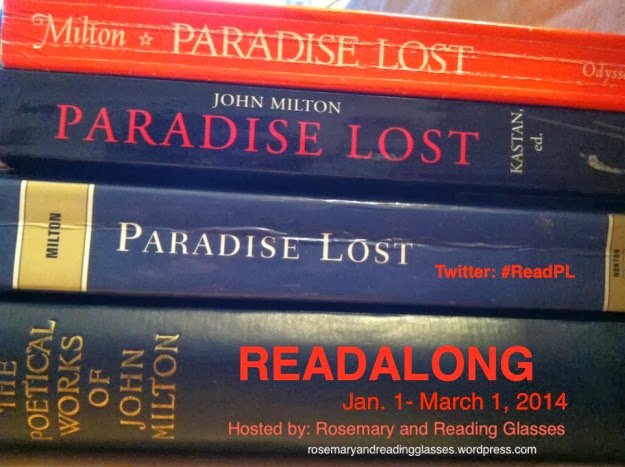 God gazes down on Adam and Eve from the Heaven, the Son at his right hand.  While demonstrating foreknowledge of their fall, he provides a defence that, for their behaviour, the blame cannot be shouldered by him; he created them as free souls and will not change the eternal:

“I formed them free, and free they must remain
Till they enthrall themselves; I else must change
Their nature, and revoke the high decree
Unchangeable, eternal, which ordained
Their freedom; they themselves ordained their fall.”

There are a number of theological themes that could be explored here, one the concept of God in time, which Boethius in his Consolation of Philosophy explains and Anslem in his work Cur Deus Homo, delves into the Satisfaction Theory.  Both are interesting, but since I am neither a theologian, nor equipped to deal with these ideas in an intelligible manner, I’ll leave it for braver souls to investigate. 🙂

While one of aspect of free will, is freedom to choose ill as well as good, I, personally, would rather be free to make bad choices than forced or coerced to make good ones.  But the main emphasis in these passages is clearly grace and mercy:

“By the other first:  Man, therefore, shall find grace,
The other, none; in mercy and justice both,
Through Heaven and Earth, so shall my glory excel,
But mercy, first and last, shall shine brightest shine.”

While justice is necessary for teaching, God is more concerned with giving mercy to the “first parents”.

Yet a transgression will be made and atonement must follow.  God asks who will redeem man his crime, “The rigid satisfaction, death for death.  Say Heavenly Powers, where shall we find such love?”

And the Son answers, breathing “immortal love to mortal men”:

“Behold me, then:  me for him, life for life,
I offer; on me let thine anger fall;
Account me Man:  I for his sake will leave
Thy bosom, and this glory next to thee
Freely put off, and for him lastly die
Well pleased; on me let Death wreak all his rage.”

Meanwhile, Satan prepares to descend to earth.  He first makes himself of comely appearance and then approaches the Angel Uriel, one of the seven angels nearest to God’s throne.  Presenting himself as a good angel while weaving a web of gross lies, he explains how he desires to visit earth to admire God’s creation and to praise the Universal Maker. Surprisingly Uriel believes him and sends him on his way to Paradise.

Satan comes closer to Eden but despair and remorse trouble his thoughts:

“And like a devilish engine back recoils
Upon himself; horror and doubt distract
His troubled thoughts, and from the bottom stir
The Hell within him, for within him Hell
He brings, and round about him, nor from Hell
One step, no more than from himself, can fly
By change of place.  Now conscience wakes despair
That slumbered, wakes the bitter memory
Of what he was, what is, and what must be
Worse; of worse deeds worse sufferings must ensue.”

“Till pride and worse ambition threw me down,
Warring in Heaven against Heaven’s matchless King —-
Ah wherefore?  he deserved no such return
From me, whom he created what I was
In that bright eminence, and with his good
Upbraided none, nor was his service hard.
What could be less than to afford him praise,
The easiest recompense, and pay him thanks,
How due!  Yet all his good proved ill in me,
And wrought but malice …….”

Even though his existence in Heaven was easy, in his dark, rebellious, ambitious spirit there is no room for love or “praise” for his Creator.

“Be then his love accursed, since, love or hate,
To me alike it deals eternal woe.
Nay, cursed be thou, since aginst his thy will
Chose freely what it now so justly rues.
Me miserable!  which way shall I fly
Infinite wrath and infinite despair?
Which way I fly is Hell; myself am Hell;
And, in the lowest deep, a lower deep
Still threatening to devour me opens wide,
To which the Hell I suffer seems a Heaven.”

His self-hatred is like a blow and it is hard to catch your breath.  Hell is torment and Satan is a very tortured angel, filled with such conflicting emotions that you can almost hear a visceral tearing inside of him.

Leaping into the garden, he alights on the Tree of Life.  How effective; what creepy, nefarious images that fill the mind.  And another paradox:  Death and Life.  We get an amazing verbal painting of the garden of Eden, its lushness, richness and beauty alive to the senses ……. close your eyes and you are there.  Satan himself views the garden “with new wonder”.

Knowing Milton’s religious background, I did not take offense at his description of Eve’s “submission”, “subjection” and yielding to Adam.  The whole poem is saturated with hierarchy.  God, the Creator, over all; angels in submission to God;  Adam created by and subject to God; the fallen angels subject to Satan …… it is understandable and perhaps practical that Eve is in submission to Adam.  But it is not a negative submission when you read how Adam addresses her:

“Sole partner and sole part of all these joys,
Dearer thyself than all ……”

“To prune these growing plants, and tend these flowers;
Which, were it toilsome, yet with thee were sweet.”

However, while the lovers discuss Eve’s creation and God’s prohibition on them from eating from the Tree of Knowledge, Uriel has discovered Satan’s false disguise and flies down on a sunbeam to warn Gabriel, who is guarding the gate.  They send out guardian angels on patrol.  While Satan slingshots from remorse, despair, anger, and envy, his evil nature ever acts king and, he is found “squatting like a toad” by Adam and Eve as they sleep, whispering foul dreams into her ear.  When he is brought before Gabriel, he attempts deception to wiggle out of his predicament and another war between God’s angels and the fallen angels nearly ignites but, at a sign from God, Satan flees.

While I enjoyed these books somewhat less than the previous ones, Milton’s cadence and rhythm are still mesmerizing.  Satan’s character becomes even more intricate and fascinating. To get out of the realms of Hell and to find the Garden, Satan is guilty of fraud and treachery, interestingly the worst sins that are represented in Dante’s Inferno.  His internal conversations with himself remind me exactly of Gollum in The Lord of the Rings, although his duplicity and malice are even more dreadful to hear.  I loved the visions of Adam and Eve and their relationship towards each other …….. harmony is the word that comes to mind, in perfect synchronicity with the Garden.  The Son’s gentle sacrifice for these first humans is very moving.

Paradise Lost – Books I and II