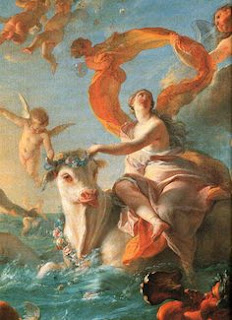 Numa becomes king of Rome, and since he has cemented the laws and customs of Rome, he now decides to study the laws of nature. Leaving Cures, he travels to Croton where an elder tells him the story of the founding of the city. Hercules on his way back to Croton, stopped at Cape Lacinium. As he grazed his cattle, he pronounced a prophesy that in two generations time, a city would rise on that spot, and it came to pass. Myscelus, son of Alemon, was born, loved of the gods.  One night as he slept, Hercules stood over him, commanding him to seek the distant Aesar.  Myscelus found himself in a terrible conflict.  It was forbidden him to leave his homeland on pain of death, yet Hercules had issued threats if he did not obey.  Myscelus called out to the gods for help and their vote freed him. Reaching Aesar, he established Croton, building walls about it as Hercules commanded, founding this Greek town on Italian soil.

Born on Samos, Pythagoras fled the tyranny of his island, preferring exile.  Drawing near to the gods, they gave him in his intellect, what nature had denied to sight.  He could speak of what governed the universe and was the first to condemn the eating of animals, calling it monstrous to let another die so you may live.  It is fine to kill an animal if it is spoiling your crops or dangerous, but for heaven’s sake, don’t eat it!  There is quite a diatribe supporting vegetarianism.  At the end, Pythagoras cautions:

“But if, in any case, your mouths still crave
the limbs of butchered beasts, then be aware

that you’re devouring your own laborers.”

You’ll stumble around if you lack reason, but Pythagoras will enlighten you.

He goes on to explain his idea of the principles of the universe, examining how all matter is continuously changing; there is no death only transformation.  This great thinker provides us with many examples, from people, to landforms, to the heavens.  This is the most (dare I say, only) scientific part of Metamorphoses.

When Numa learns all he is able from Pythagoras and other great thinkers, guided by the Muses, he rules the Latin state with his wife, Egeria.  He teaches the people the art of peace, as all they’ve known is war, and upon his death the populous mourns.  Egeria flees to the woods in the Aricia valley.

Weeping Egeria is confronted by Theseus’ son, Hippolytus, who urges her to stop her grieving.  He tells her of his father’s wife, Phaedra, who tried to seduce him and when he resisted, told lies about him in revenge.  A fugitive, he fled to Corinth where he came upon an enormous wave which terrified his horses.  Hurled from his chariot and dragged, he went down into the kingdom of the dead, before his life was saved by Apollo’s son, Aesculapius.  Diana hid him, renaming him Virbius in case he was recognized.  Egeria’s suffering cannot even compare to his, but she continues to weep, her piteous grief transforming her into an eternal spring with the help of Diana.

In an Etruscan field, a clod of earth takes human form, the augur, Tages.  He taught the people of Etruria to read the future, and Hippolytus is also amazed at how Romulus’ shaft sprouted into a tree when he placed it in the ground, offering shade to all.

Yet Hippolytus is dismayed by Cipus, who looks into the sea and views horns upon his head.  He is amazed, uncertain if the unexpected appendages augur good or evil.  An augur prophecies that he must go to Rome and rule the great city, however Cipus prefers exile to power.  He is banished from the city, but given a plot of land in consolation.

An horrendous plague breaks out in Latium with dead bodies rotting everywhere.  The people appeal to Phoebus but are told they need to seek Apollo’s son, Aesculapius (see Metamorphoses Book II). Travelling to Greece, the Roman senators ask for the god to be dispatched to Rome, relating the circumstances.  The Greek elders are divided as to how to act, but at the temple, the god himself appears in the form of a serpent.  Joining with the Romans, the Greeks worship him and the snake, hissing a blue-streak, slithers onto the Roman ship, a clear sign as to his decision.  And so the snake/god comes to Rome, the plague is lifted and all are saved.

The deeds of Caesar won him great triumph and in the end he turned into a comet. Ovid spews sycophantic praise on the man and through him, August Ceasar, his “son”, then he relates Caesar’s demise.  An hideous crime …. a sorry death …. and Venus was distraught beyond grief.  Many signs and omens appeared to expose the plot but blood was spilled in the Curia.  Ovid then links Augustus’ name with the great hero, Aeneas. One day Augustus will join his “father” in the divine realms.  Lots of spectacular rhetorical flourishes in this part, which are a bit much to take.

Ovid’s tale is now complete but for his epilogue:

” ….. But with the better part of me, I’ll gain
a place that’s higher than the stars: my name,
indelible, eternal, will remain.
And everywhere that Roman power has sway,
in all domains the Latins gain, my lines
will be on people’s lips; and through all time —
if poets’ prophecies are ever right —
my name and fame are sure: I shall have life.”

In parting, Ovid rather deifies himself, and at the same time, confirms Pythagoras’ theory: things to not die, they merely metamorphose.

The last few chapters of Metamorphoses certainly didn’t compare to the rest of the book. They have a rather bland resonance to them, are even more uneven and disparate than the other books.  I did, however, find a quote from this book that is a wonderful description of the work as a whole:

“Indeed
since I am now well launched on this vast sea
and, under full sail, with kind winds, can speed,
I add:  in all this world, no thing can keep
its form.  For all things flow; all things are born
to change their shapes.  And time itself is like
a river, flowing on an endless course.
Witness: no stream and no swift moment can
relent; they must forever flow, just as
wave follows wave, and every wave is renewed.
What was is now no more, and what was not
as come to be; renewal is the lot
of time …..”