Ekaterina at In My Book is hosting a Language Freak Summer Challenge. Since I continually profess that I am going to attempt a book in French, but as yet have had little inspiration, I thought a challenge would be a good shove forward.

Read books in a foreign language this summer.  The challenge runs from May 1st to August 31st.

The Levels of the Challenge:

Beginner: read 1 book in any foreign language
Intermediate: read 2 books in any foreign language
Advanced: read 3+ books in any foreign language
The books can be in one or in several different foreign languages. You choose what you want to practice! But for really crazy linguists I have a special offer, which is called accordingly:
Crazy Linguist: read at least 1 book in EACH foreign language you know. Of course, this one is additional to the above listed three levels!
Bonus level is for films:
Subs Fan: watch any number of films in a foreign language (Why is it called so? Because subs are allowed, of course!)
After you read your book (or watch a movie), you are encouraged to post about your experience! It can be a review, or a reflection, or a rant, whatever! If the book’s language affected your experience, write about it! Is it easy or difficult? Does it have crazy grammar or so many rare words that you couldn’t put down your dictionary? Share!
For the hardcore language freaks I have another optional task! Try to write about the book in the language you read it in! Just a few phrases, to practice your writing! Last year native speakers were known to friendly explain the mistakes in the reviews, so don’t be afraid to make them! It’s all for your benefit, you know.

1.  What languages do you know?  I know basic French and Spanish (although my Spanish is very rusty), less than basic German with a smattering of Latin and ancient Greek.

2.  What is your history with these languages?  I studied French for seven years in school but with sub-par instruction, so my French is embarrassingly weak when you consider the study time.  I studied both Spanish and German in school for one semester, but my German teacher was amazing so the German I learned in one semester was comparable to about three years of French class. Latin and Greek I’ve learned alongside my daughter while homeschooling her, but she has surpassed me now.  I wish I had more time to devote to learning these languages.

3.  Do you use them or are you out of practice?  I was very fortunate to be able to travel to France about 5 years ago, twice, for about 6 weeks each time.  Initially my French was woefully inadequate (I had to use Spanish to find my hotel), but gradually it came back and when I left the last time, I was able to understand conversations, although my speaking skills still needed much practice.  I’ve tried to keep it up since then.  My Spanish used to be pretty good, but needs a tune-up.  In German, I’d be lucky if I could read children’s books —- I need more instruction.  As for Latin & Greek, I have glorious dreams of being able to read Homer or Xenephon in Greek and the Aeneid in Latin ……… sadly I have a loooong way to go to reach that point but I can read a short story about the Gallic wars in Latin.  Such is my pitiful claim to fame. 😉

4.  Have you read some books in these languages?  Did you like it (them)?  I’ve read a number of children’s books in both French and Spanish.  I also started both Candide and Alice in Wonderland in French but didn’t finish them.  I tried reading The Cat in the Hat in Latin but crashed and burned.

5.  What are your plans for the challenge?  I plan to try to read either Le Petit Nicolas, Le Tour de la France par Deux Enfants or Les Malheurs de Sophie as a main book.  Otherwise I would like to read some Fables de Fontaine, a Martine book, some German fairy tales, Ferdinand in Latin and a Spanish book, perhaps Corre, Perro, Corre, or another choice.  It’s nice to have four months for this challenge ~~ there are so many possibilities to explore and I will certainly have the time to investigate them! 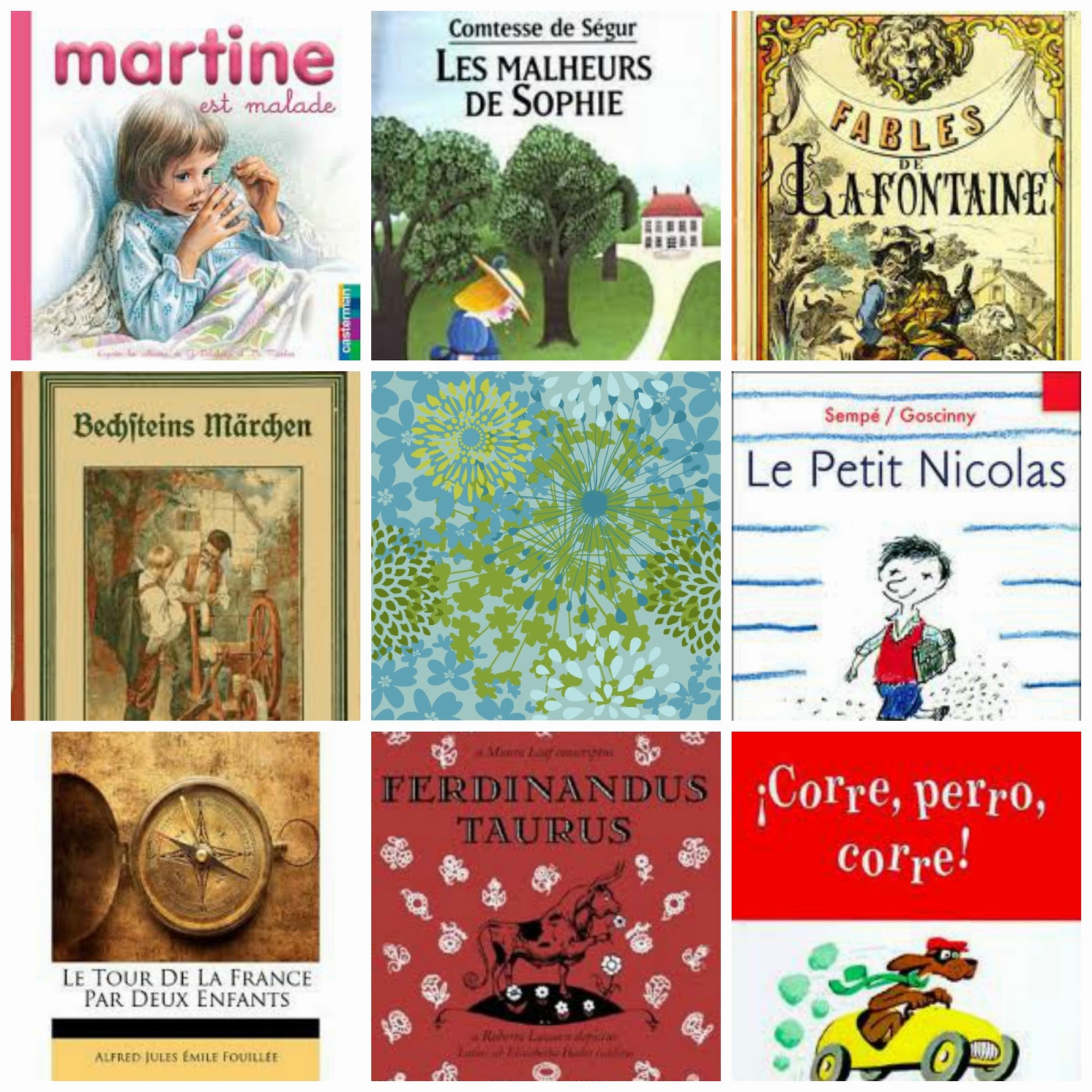 Does it sound like fun?  Do you want to join in?  Then write an introductory post and then go to Ekaterina’s blog and link it to the linky there.  Please see her blog for other details about this exciting challenge.  Thanks for hosting, Ekaterina!

What Did I Read?