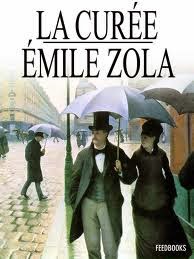 “On the drive home, the barouche was reduced to a crawl by the long line of carriages returning by the side of the lake.”

The title of Émile Zola’s third novel (in Zola’s recommended reading order) of the Rougon-Marquart series, La Curée, or The Kill, refers to the spoils of meat thrown to the dogs at the completion of a hunt, and so is a reflection of the wild and uncontrolled speculation in Paris of the 1850s and 1860s, where monetary greed runs rampant, spewing the biproducts of immorality, licentiousness, fraud and hypocrisy.

Aristide Rougon, has arrived in Paris from Plassans with his first wife, Angèle. Poor and provincial, Aristide dreams of wealth and a life of luxury and notoriety.  Ignited by his near fanatical desire for money, he manages through dishonest dealings to cheat and finagle his way into property speculation in this city, that is expanding at a near-combustible rate.

As usual, Zola grabs you and pulls you into the story with his lush and vibrant prose, and vivid descriptions:

“This was the time when the rush for spoils filled a corner of the forest with the yelping of hounds, the cracking of whips, the flaring of torches.  The appetites let loose were satisfied at last, shamelessly, amid the sound of crumbling neighbourhoods and fortunes made in six months.  The city had become an orgy of gold and women.  Vice, coming from on high, flowed through the gutters, spread out over the ornamental waters, shot up in the fountains of the public gardens, and fell on the roofs as fine rain.  At night, when people crossed the bridges, it seemed as if the Seine drew along with it, through the sleeping city, all the refuse of the streets, crumbs fallen from tables, bows of lace left on couches, false hair forgotten in cabs, banknotes that had slipped out of bodices, everything thrown out of the window by the brutality of desire and the immediate satisfaction of appetites.  Then, amid the troubled sleep of Paris, and even more clearly than during its feverish quest in broad daylight, one felt a growing sense of madness, the voluptuous nightmare of a city obsessed with gold and flesh.  The violins played until midnight; then the windows became dark and shadows descended over the city.  It was like a giant alcove in which the last candle had been blown out, the last remnant of shame extinguished.  There was nothing left in the darkness except a great rattle of furious and wearied lovemaking; while the Tuileries, by the riverside, stretched out its arms, as if for a huge embrace.”

Aristide changes his name to Saccard and, as his wealth grows, after the death of his wife he marries the young Renée Béraud du Châtel and later brings his son, Maxime, to live with them in Paris.  Renée, perpetually bored, is delighted at the thought of someone to pet and coddle and use as a tool to gain attention, and so becomes highly involved in Maxime’s moral development (or perhaps I should say, amoral development).  When we meet him in the novel as a twenty-year-old young man, he is happily aping his parents’ generation, as money flows through his fingers like water and unlimited pleasure is sought as nourishment, with little regard for the consequences.

As Saccard’s insatiable lust for money drives his every action, and he balances on the wire between wealth and ruin, Renée and Maxime fall into a comfortable and close relationship, which becomes the catalyst for a semi-incestuous affair driven by Renée’s boredom and lust for a new inventive perversion.  Yet instead of being entertained and satisfied by their liaison, through different circumstances, Renée finds herself debased and abandoned.  There are no loyalties in the new Paris, except with the reward of monetary gain, and true human feeling has all but been extinguished by obsessive desires for money and decadence.  Renée is a casualty of little importance.

Zola’s novels have an air of tragedy about them that is not necessarily brought on only by the actions of the characters or the plot of the story.  In Zola’s eyes, each character is trapped by their inherent nature in a cycle from which they cannot escape.  They are helpless and we get the sense of a drowning man who cannot be rescued, or a figure who cannot be pulled from in front of a speeding train.  This echoes the ideas of fate supported by the ancient Greeks, in that there is nothing you can do to change your destiny.  I’m not certain that I agree with his presentation.  We all have the ability to choose in each situation and, while each choice may entail a different degree of difficulty, our decisions do shape our fate to a greater or lesser degree.  Choice is what separates man from animal, and Zola’s portrayal of man trapped in an hereditary cycle exemplifies the destructive consequences when man follows only his instincts without an ethical or moral base.

This was the only Zola I was able to finish for Fanda Classiclit’s Zola Addiction, but I was happy to finish only one.  Zola is not an author I want to rush through; he makes you want to sink into his settings, try his prose out on your tongue and learn more about the historical content.  Money is the next Zola on my list and I’m looking forward to it!

The Fortune of the Rougons
Son Excellence, Eugène Rougon
L’Argent