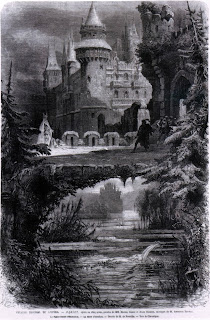 Claudius appears to have placated Laertes, but then a messenger arrives with the letters from Hamlet. Once again, Claudius is befuddled.  What could his letter mean?  Hamlet claims that he is returning alone. Is he lying?  Is it another trick? Laertes has no insight to add but Claudius first ensures his loyalty against his young enemy. Claudius has heard it bandied about that Laertes is a master swordsman.  Using quite masterful manipulation of Laertes’ grief, Claudius urges him to challenge Hamlet to a sword fight.  Not only does Laertes agree, he reveals that he will put poison on the end of his sword, so that even a little scratch, will kill Hamlet.  Claudius approves the plan but he is hesitant.  It must be done in a way that leaves no doubt of Hamlet’s death.  If the sword doesn’t do the job, he will have a poison drink ready for Hamlet.

Their plans are interrupted by Gertrude, who hurries in to announce the death of poor Ophelia.  In her muddled madness, Ophelia wandered down to the brook, making wreaths of flowers.  When she tried to climb out on a branch to hang her garland, the limb gave way and she fell into the brook.  She sang lovely old hymns as her garments dragged her down to her death.

Laertes is once again grief-stricken and Claudius follows him to try to moderate his actions.

Again Hamlet keeps Claudius on his toes.  The king must be in agony wondering what he will do next.  Claudius also spends an inordinate amount of time attempting to sooth Laertes’ wrath, aiming it in the appropriate direction, and ensuring his loyalty to the crown.  Using serpentine manipulation, he almost taunts Laertes, bringing up words vs. deeds and action vs. inaction.  I almost get the feeling that Claudius is getting desperate.  He already has Hamlet to deal with and another young man out of his control is certainly, at the least, worrisome.  Remember, the people are presently calling for Laertes as king.  Claudius’ hold on his power is tenuous at best.

I kind of liked Laertes before these last few scenes, but recently he’s showed himself to be a hot-head, easily manipulated, and perhaps not too bright. While it is understandable that he wishes to avenge his father’s death, his plan for Hamlet’s demise is rather dishonourable.

And, ah, the death of Ophelia, made more poignant by her singing and the symbols of flowers.  It’s as if she’s making wreaths for her own grave before her death actually occurs.  Does this emphasize her aloneness ….. with her father dead, she only has her brother, and in her madness is truly isolated.