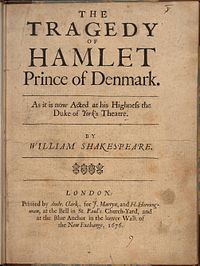 Rosencrantz and Guildenstern turn up to question Hamlet about the body of Polonius.  Hamlet again speaks very insightful nonsense to them, which they do not appear to understand.  Finally he agrees to be taken to the king.

I wonder …… are Rosencrantz and Guildenstern dense?  They are carrying out Claudius’ orders without question, and the copious insults that Hamlet flings at them, seem to pass right over their heads.

What exactly did Hamlet mean when he said “The body is with the king, but the king is not with the body …”  Is this a reference to his father’s murder, in that his dead body the responsibility of Claudius, but Claudius is not physically with it?  Or what he hinting that Claudius was actually to blame for the death of Polonius, even though he wasn’t physically with the body?