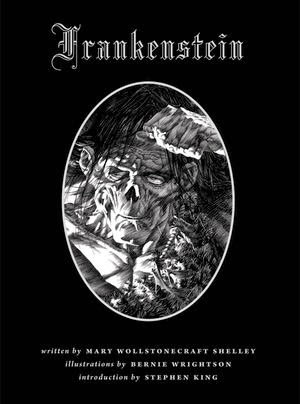 “You will rejoice to hear that no disaster has accompanied the commencement of an enterprise which you have regarded with such evil forebodings.”

Gaining a passionate, yet unguided knowledge for science, young Victor Frankenstein arrives at university with an unquenchable thirst for learning and advancement.  When he involves himself in an isolated solitary experiment to create life, the resulting creature so appalls and revolts him, that he cannot contain his revulsion.  The consequent rejection of his creation culminates in a series of tragedies that could not even have entered Frankenstein’s imagination.

Initially, the book begins with an introductory sub-plot of Robert Walton, a scientific adventurer who is on a naval quest to find a northern passage or discover the secret of the magnetic poles.  Walton is portrayed as a man intoxicated with the desire for knowledge, a clear indication that his character mirrors that of Victor Frankenstein, and his idealistic dreams parallel those of the friend he rescues (Frankenstein).  At the beginning of Frankenstein’s story, we see how he immerses himself in science and, by doing so, isolates himself from the friends and acquaintances around him, and remains housebound, separated from the outdoors. Without companionship and nature, the very things that feed our souls, he is blind to the spiritual aspects of humanity, seeing only the physiological perspective of a scientific creation.  In effect, he rejects his own Creator to put himself in His place.

In fact, the first sentence of the book, the beginning of a letter from Robert Walton to his sister, gives the reader a clue as to the lack of awareness the scientist can develop to the world around him:  “You will rejoice to hear that that no disaster has accompanied the commencement of an enterprise which you have regarded with such evil forebodings.”  In a frenzied quest for new discovery, the scientist can often lose any objectivity and will marginalize the prudent advice given by others, who have perhaps more objective insight.

In Frankenstein’s story, we get a cautionary tale of the consequences of unexamined and incautious actions based on a deification of science, yet therein also lies a theme of abandoned responsibility.  If Frankenstein had attempted to communicate with the creature and valiantly hid his disgust of it, would the outcome have been different?  Could he have humanized his creation with sympathy and nurturing?  I have my doubts. Upon the creature’s flight and escape to the woods, he discovers a family living there and, by observing them, he learns to read and write and is exposed to profound literature, which reveals both goodness and evil to him. The creature learns what it means to be human and, in fact, admires the goodness of the family.  However he ultimately chooses evil, using his rejection by humans as an excuse for his deviant actions.  Victor Frankenstein was another unsympathetic character.  Numerous times he had a chance to attempt to stop the evil he had created, yet each time he did nothing, often at the expense of a human life.  I was actually quite disgusted with him.  His inaction was almost on a level with the creature’s atrocities.

While I found the plot of this novel in some senses exaggerated, in a general sense it brought up a number of important issues for reflection.  Are we responsible for what we create and, if so, to what degree?  Is knowledge something to be pursued with unlimited passion, or should we approach it with a healthy respect, and should restrictions be put on our pursuit of it?  Does the development of character, values and morality depend on genetics or environment? Shelley brought attention to these universal and timeless issues which segued into more specific questions related to the story.  Should the creature be pitied?  Does his abandonment, rejection and isolation justify his actions of revenge?  Was Frankenstein’s rejection directly responsible for the tragic circumstances, and therefore, was he completely to blame for his own fate?  Is the creature evil, or simply a misunderstood creation, who, if loved and nurtured, would have developed love and empathy and a conscience, like most other human beings?

The story of Frankenstein was birthed during a trip to Geneva in 1816. Together with her husband, the poet Percy Bysshe Shelley, Mary Shelley spent the summer there with their companion, Lord Byron.  After Byron proposed that they each write a ghost story, Shelley found herself at a loss for inspiration.  It was only after a conversation about the “re-animation of a corpse,” that Shelley had a waking dream:

“I saw the pale student of unhallowed arts kneeling beside the thing he had put together.  I saw the hideous phantasm of a man stretched out, and then, on the working of some powerful engine, show signs of life, and stir with an uneasy, half vital motion.  Frightful must it be; for supremely frightful would be the effect of any human endeavour to mock the stupendous mechanism of the Creator of the world.“

And so Frankenstein was born.

Mary Shelley was the daughter of William Godwin and Mary Wollstoncraft Godwin, the former a philosopher, novelist and journalist, the latter also a philosopher as well as a writer.  With such notable antecedents, Shelley’s exposure to books was unusually vast for a female of her era.  Here is a chronological list of the works of literature which she read during the years of 1814 to 1821.

Here, also, are two other excellent reviews of Frankenstein by M. Landers and Majoring in Literature for your reading pleasure!  Enjoy!

10 thoughts on “Frankenstein by Mary Shelley”