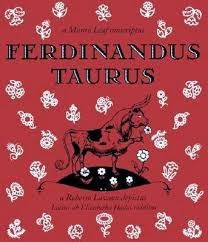 Well, right away I must confess that my Latin is not nearly good enough to read this book unaided.  I can read short paragraphs about Caesar fighting barbarians and Roman generals, but that’s about it.  However, the dictionary at the back of this book came to my aid as did other resources.  Honestly, I confess though, it took me ages to read this.

Almost everyone, I think, knows the Story of Ferdinand, the young bull who lives in Spain and would like nothing better than to sit in his meadow and to smell the flowers.  Yet when a bumblebee inopportunely stings him, just as some matadors are checking out bulls to take to Madrid to the fights, things go terribly wrong.  Ferdinand is mistaken for a magnificent fighter and is dragged off to the bullfights.  But our intrepid hero will not give in, no matter how many banderillos or picadores or matadores taunt him to fight. No, Ferdinand stays true to his placid nature and simply sits and smells the flowers. Finally he is sent back to his meadow and he is free. 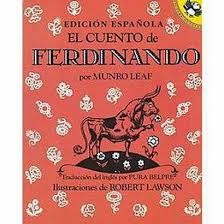 And since this book is set in Spain, what better tribute than to read it in Spanish?  So that’s what I did after my foray into it in Latin.  “Había una vez en España un torito que se llamaba Ferdinando.”

This book was published in 1936, nine months before the civil war broke out in Spain, and was seen as a promotion of pacifism.  Francisco Franco, the Spanish dictator condemned it as propaganda, as did Hitler, who banned the book in Nazi Germany.  In contrast, the book was lauded by the political left; Gandhi claimed it was his favourite book, and it was the only non-communist book allowed in Poland by Joseph Stalin.

I did a comprehensive analysis of The Story of Ferdinand in English on my children’s book blog.  The depth of this book is astounding.  You can find my review here.

Okay, I squeaked in one more book (well, actually two if you count both the languages) for my Language Freak Summer Challenge.  Yippee!