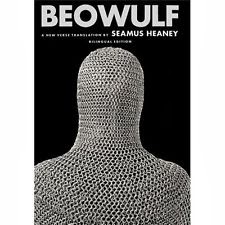 The first time I read this poem was for a university class and I was not looking forward to the gore, blood and general epic hero story.  In retrospect, how fortunate I was to be forced to read it because Beowulf immediately became one of my absolute favourites!

Hrothgar, king of the Danes, is being harassed and attacked by the monster, Grendel, a son of Cain, who trashes his precious hall and eats his warriors.  No one is able to combat such evil until Beowulf arrives, determined to repay an old debt.  He defeats the monster, and later Grendel’s mother who comes for revenge.

The story is quite riveting but it is the underlying behaviour of these pagan warriors living in a blood-feud society, which points to a different theme from the usual pagan story.  Beowulf is strong and brave, and is drawn by the lure of spoils, yet he shows moments of kindness, consideration and a propensity not to accept power or prestige if it goes against what he thinks is right.

Tolkien in his essay, The Monster and the Critics, tends to think this poem shows the advent of Christianity and the beginning effects which it had on a pagan culture.  I would tend to agree.  There is certainly a Christian theme, yet it does not appear the religion is being forced upon the culture (or upon the reader), just a gentle and slow changing of perception and behaviour.

A few of my favourite quotes from the book:

” ….. struck suddenly and started in; he grabbed and mauled a man on his bench, bit into his bone-lappings, bolted down his blood and gorged on him in lumps, leaving the body utterly lifeless, eaten up hand and foot …”

” …. And so the good and grey-haired Dane, that high-born king, kissed Beowulf and embraced his neck, then broke down in sudden tears. Two forebodings disturbed him in his wisdom, but one was stronger: nevermore would they meet each other face to face. And such was his affection that he could not help being overcome: his fondness for the man was so deep-founded, it warmed his heart and wound the heartstrings tight in his breast ……”

and a good lesson for life:

” …… Whoever remains for long here in this earthly life will enjoy and endure more than enough ….”

A wonderfully crafted poem and story that is a must-read for everyone!