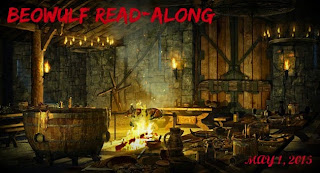 Does Beowulf’s legacy pass to Wiglaf, making him a new type of hero, or does the culture of fate and destiny still have a hold on this society?

For me, these last sections of the poem were the most difficult to understand, with many possible contradictions; the history of the treasure; the importance of the treasure to the poem — is it a symbol of fame and glory or a warning symbol of materialism and its effect on society; the significance of the number 50; we have more death caused by kin — what does this mean?; the contrast between Beowulf’s earlier contest with Grendel and this contest with the dragon; God not allowing Grendel near Hrothgar’s throne yet he allows the dragon to destroy Beowulf’s throne-hall, etc.  So many interweaving threads in this story leave wonderful trails to follow and with my fifth read of the poem I’m still pondering the implications of the themes it contains.

I’d love to hear the comments of those of you still with us!