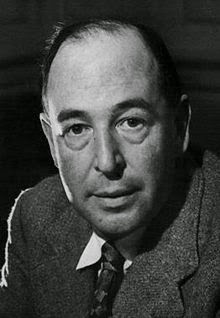 Dorothy L. Sayers is best known for her Peter Wimsey mysteries, but she was also a playwright, poet, essayist, and theologian, writing such books as The Man Born to Be King, Creed or Chaos?, The Mind of the Maker, and Are Women Human?  In her own eyes, her finest work was her translation of The Divine Comedy.

Both Lewis and Sayers completed their academic studies at Oxford University and their first meeting was through a fan letter that Sayers wrote to Lewis upon reading his The Screwtape Letters.

“She was the first person of importance who ever wrote me a fan letter ……..  I liked her, originally, because she liked me; later for the extraordinary zest and as edge of her conversation —- as I like high wind.  She was friend, not an ally.” (Lewis)

In this panegyric read at Sayers’ funeral, Lewis praises Sayers’ literary work. While he admits to not being a fan of detective fiction, he nevertheless respects their authors and explains that, contrary to rumours that Sayers was later ashamed of her “tekkies”, she had merely “felt she had done all that she could” with the genre.  He claims there is no “cleavage” between her detective work and her later theological works, citing Pascal’s quote, “One shows one’s greatness not by being at an extremity but by being simultaneously at two extremities.”  He discusses the writing of Christian works, the problems of the intrusion of self and the commonalities between detective fiction and religious writing.

With regard to the importance Sayers placed on the quality of writing, he quotes from her The Man Born to Be King, “Let me tell you, good Christian people, an honest writer would be ashamed to treat a nursery tale as you have treated the greatest drama in history: and this in virtue, not of his faith, but of his calling.”  The intention to behave piously was no excuse for a job poorly done.

Finally, he praises her work of the translation of Dante’s The Divine Comedy and goes on to say of her independent character:

” For all she did and was, for delight and instruction, for her militant loyalty as a friend, for courage and honesty, for the richly feminine qualities which showed through a port and manner superficially masculine and even gleefully ogreish —- let us thank the Author who invented her.”

This essay can be found in:

Deal Me In Challenge #14 – Five of Spades

17 thoughts on “A Panegyric for Dorothy L. Sayers by C.S. Lewis”