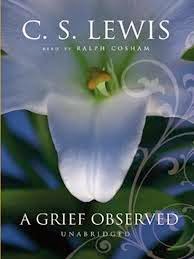 “I never knew that grief felt so much like fear.”

In A Grief Observed Lewis shares his thoughts and emotions with regard to the death of his wife, Joy Davidson, and it is perhaps one of the most powerful books on suffering that I’ve ever read.  As a reader, you are drawn into his grief and, contrary to what the title suggests, you can feel and experience Lewis’ anguish right alongside him, at times almost against your will.  Lewis is pain personified, and it’s raw and it’s shocking.

In his book, The Problem of Pain, Lewis deals with suffering from an aspect of reason and pragmatism, but in A Grief Observed, he is a broken man, on one hand calling out for sense and understanding to apply to a situation that is beyond comprehension, and on the other, resisting examining his situation. Lewis’ faith was shaken but not broken.  He does not deny God, yet he does ask what kind of God is He?  What type of God would allow something like this to happen?  He asks hard questions, makes brutally honest statements, and you wonder if this man is on his way to losing his faith.

Yet why can’t we ask hard questions of our Maker?  Why can’t we storm and rage against the injustices of life?  Lewis kicked and stormed against the door of Heaven and instead he found an opening into his own soul.

“God has not been trying an experiment on my faith or love in order to find out their quality. He knew it already. It was I who didn’t. In this trial He makes us occupy the dock, the witness box, and the bench all at once. He always knew that my temple was a house of cards. His only way of making me realize the fact was to knock it down.”

After long endeavouring to remember his wife’s countenance, it is only when he stops struggling to see Joy, that her face suddenly returns to his mind. Lewis finally realizes that we need to seek God for Himself — for who He is —- and not for what we can get from Him.

“You never know how much you really believe anything until its truth or falsehood becomes a matter of life and death to you. It is easy to say you believe a rope to be strong and sound as long as you are merely using it to cord a box. But suppose you had to hang by that rope over a precipice. Wouldn’t you then first discover how much you really trusted it?”

Madeleine L’Engle writes in her introduction to the book:  “I am grateful to Lewis for having the courage to yell, to doubt, to kick at God in angry violence. This is part of a healthy grief which is not often encouraged.  It is helpful indeed that C.S. Lewis, who has been such a successful apologist for Christianity, should have the courage to admit doubt about what he has so superbly proclaimed.  It gives us permission to admit our own doubts, our own anger and anguishes, and to know that they are part of the soul’s growth.”

12 thoughts on “A Grief Observed by C.S. Lewis”