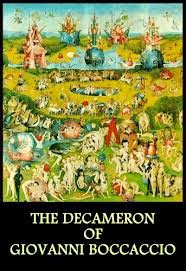 Written by Giovanni Boccaccio in the 14th century, it is a medieval allegory presented as a frame story.  One hundred tales are told by ten young people, seven young women and three young men, after they flee to a deserted villa to escape the plague ravaging Florence.  The stories are various tales of different forms of love interspersed with tales of wit and moral lessons.
This book is a tome but I think it would be fascinating to get a look in at 14th century Italy.